Posted on Friday, 22 April, 2011 by twobirdsflyingpub
This post kicks off my JTRS project. My objective is to give the reader a 50,000 ft. MSL view of an emerging communications technology and the role it plays in the netcentric battlefield. The concept of a software defined radio is hardly new, but before it could become reality technology had to deliver the processors and codecs needed to support the software defined architecture. Those developments are still expanding and will continue to drive better utilization of the spectrum.

We all take radio communications for granted, knowing that we
speak into a microphone and some one at the other end hears what we’re saying
and we hear them back. It ‘s a natural process that we intuitively perform 24×7.
However, audio frequencies do not propagate well over long distances and when
miles or even hundreds of miles separate the source and sink, audio frequencies
are impractical and a transport or carrier mechanism needs to be used. 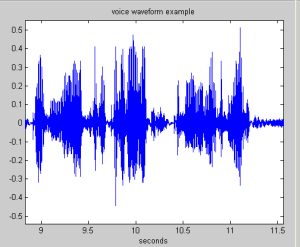 The human voice occupies the 300 Hz to 3400 Hz space within the audio frequency spectrum of 20 Hz to 20,000 Hz. Frequencies below 20 Hz will be felt before they are heard and frequencies above 20,000 Hz are beyond hearing rage in all but a few cases.

A human voice cannot be effectively transmitted over distances we must use some other medium. That medium is a radio frequency (r.f.), or a light source like a laser. In either case, we use the audio signal to alter (modulate) the radio frequency or light source. 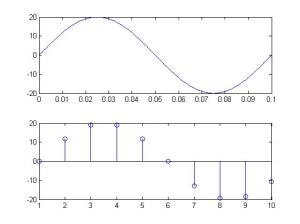 A 1 sec. sample of the signal generates a 64,000 bit per second data stream. Each sample point is described using an 8 bit word.

In the digital domain, we sample the audio signal 8000 times per second. Each point in the sample is described by an 8 bit binary word producing a continuous binary stream of 64,000 bits per second. Silence is also sampled which creates one of many opportunities for compression techniques.
Although the digital domain will never precisely duplicate an analog voice signal, it does create an opportunity for compression and coding techniques previously unavailable. More importantly, the digital bit stream can now be processed by a computer and can be routed using TCP/IP.

In my next JTRS post I will expand on these digital techniques but remember that the objective remains the same and that is to alter the carrier frequency so that we encode or embed the desired information.