Posted on Saturday, 17 September, 2011 by twobirdsflyingpub 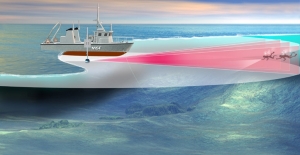 Vessel vulnerability while at anchor or port remains a significant concern to commercial and military vessel owners and operators. The damage that live divers can inflict on a docked ship, or at anchor, is substantial. All of the major security firms that I’ve had contact with have maritime programs geared to mitigate that risk. They now have a new tool.

The new system configuration is designed to be highly portable for rapid deployment. It can be deployed and operational in less than an hour and can be mounted on a harbour wall, wharf or on a small vessel for mobile operations in ports, rivers and estuaries.

The system utilizes RESON’s SeaBat 7128, which is the world’s only dual frequency diver detection sonar that operates in excess of 200 kHz and now incorporates the latest version of the PDS2000 ADT software. The PDS2000 ADT software has new features enabling users to overlay sonar images and detected targets on a digital map for ease of identification in busy cluttered environments.

REASON Headquartered in Denmark, has a global presence and has become synonymous with multi-beam sonar arrays and supporting technologies.