Posted on Sunday, 27 May, 2012 by twobirdsflyingpub 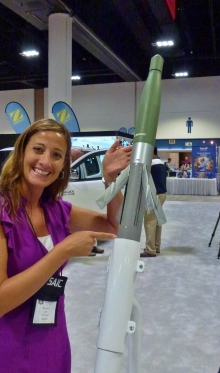 I admit to having a fond place in my heart for BAE Systems; it’s rare to find a company of its size with as much creativity and entrepreneurship. The Advanced Precision Kill Weapon System or APKWS is but one example of that.

APKWS is a precision, guided rocket that can be fired from any 2.75 inch pod, fixed wing or rotary. The system consists of four major assemblies: MK66 MK 4 rocket motor, WGU-59B guidance section, M151 warhead, M423 fuse. A second after firing, the rocket guidance section deploys four wings. The wings have aileron like trailing surfaces, called flaperons, that function to stop rotation of the rocket stabilizing its flight path. The wings also provide the mounting surface for the laser seekers. The APKWS uses the same laser designator, for targeting, as used with the Hellfire missile, integrating seamlessly with that armament.

What really impressed me about BAE’s AP 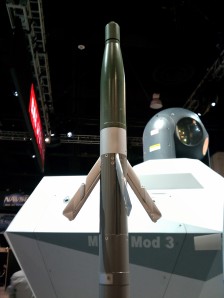 KWS is not just the lovely and charming Karen Spiller, it’s the modularity of design. BAE had its thinking cap on and working. The technology makes it possible for BAE’s customers to convert existing, unguided, Hydra rockets into precision guided rockets. The process is rather simple and is accomplished by removing the existing Hydra warhead and fuse; installing the WGU-59B guidance section in its place, followed by replacing the warhead. Key to this conversion is the fact that pods and aircraft require no modification – talk about “bang for the buck”. The entire concept is simply outstanding!

The weapon was fired for the first time in combat operations in Afghanistan from AH-1W and UH-1Y helicopters supporting U.S. Marine Corps ground forces in March.