Posted on Wednesday, 30 May, 2012 by twobirdsflyingpub 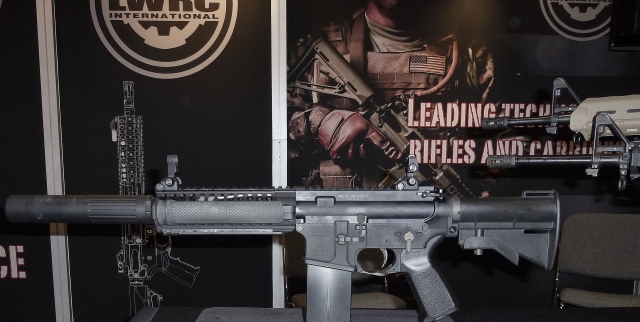 LWRC International is a pioneer in the development of short-stroke gas piston operating systems for the AR15 / M16 platform; the company is also one of the competitors in the U.S. Army’s carbine competition. LWRC carbines are considered to be some of the finest carbines in the world.

While at SOFIC 2012, in Tampa, I had an opportunity to checkout, in some detail, their M6A2-PSD 300 Blackout. For those unfamiliar with LWRC’s PSD concept, the thought process behind the PSD is simply that limiting yourself to a pistol caliber SMG for space and size considerations is unnecessary. In line with that thought process, they developed the PSD which provides all of the functionality of an M4 but in a very compact package. They have a 6.8 SPC model and now a 300 Blackout, which would be my personal choice for its terminal ballistics. Crudely stated, it is a freight train.

Depicted is an M6A2-PSD, chambered in 300 Blackout, selective fire, 8.5 inch barrel and suppressed with an AAC 7.62 sound suppressor. A dream package for close quarter or security work.