Another True Story – The Case Of A Vessel In Distress

Posted on Sunday, 3 June, 2012 by twobirdsflyingpub

About four or five weeks a go I was biking along Bayshore Blvd., Tampa, Fl when I noticed a white houseboat tied up to the seawall, which runs along the south side of the Bayshore. If you are at all familiar with Hillsborough Bay, you know that prevailing winds are from the S to SW, and as the tide ebbs, you can get some pretty nasty  surges and heavy chop. I inspected the vessel, saw no hull markings, and noted that it did not appear to be very seaworthy. I called it in to Tampa P.D.; at the time, my concern was that if the seas picked up the seawall could be easily ripped out. Tampa P.D. sent an officer out to investigate and later that day, the boat was removed. The owner, I assume, moves the boat to a shoal about 400 to 500 yds offshore. 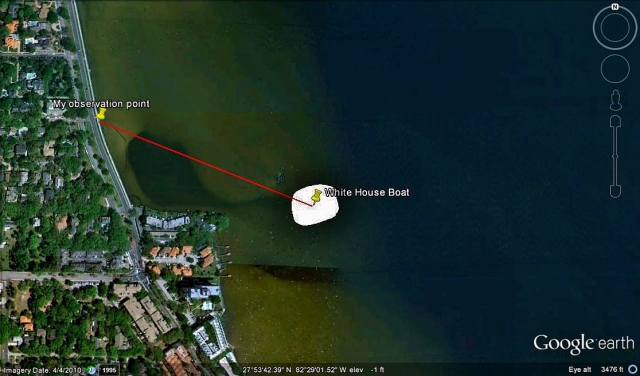 Google Earth Image Showing My Observation Point and Approximate Location Of The Boat.

A week later, while biking, I noticed that the boat had a prominent port list and I decided to call it in to the Coast Guard, believing it represented a hazard to navigation. At the time of my report, I did not have a GPS or compass with me so I estimated the line of sight bearing to the vessel, from my point of observation, as 145° magnetic – the actual bearing was closer to 116° magnetic. The Coast Guard asked me for a description, which I relayed as best as possible. My good deed for the day was done and the situation was now in the hands of the Coast Guard.

Another two weeks had elapsed and I went for another bike ride but this time I noticed that I could see no free board and the vessel’s deck was awash with only the pilot house sitting above the waterline. Clearly the boat had sunk.

Why, I have a problem with this:

I don’t fault Tampa P.D. who, day in and day out , do an excellent job and God knows the Coast Guard has enough to do, especially in times of shrinking budgets. However, I’ll bet you dollars to doughnuts that a pre-DHS Coast Guard would have had a crew out there checking this out.

Maybe its just me but I think our response should be a bit more proactive!