Posted on Sunday, 3 June, 2012 by twobirdsflyingpub 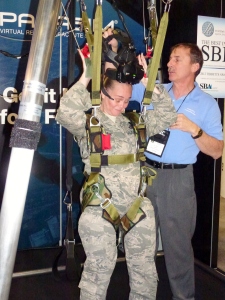 Systems Technology, Inc., hereafter referred to as STI, is based in Hawthorne, CA. The firm is 100% employee owned founded in 1957  as a small R&D company devoted to the study of the behavior of dynamic systems, including ground and aerospace vehicles, and the human operators attempting to control them.

STI developed and markets PARASIM®, a parachute training and simulation systems, which has evolved over the years to be quite an exceptional tool. For starters, running on a PC and Windows 7, it can simulate any type of jump; under any environmental condition, day or night. Trainees or operators have any choice of canopy or foil. Furthermore, surroundings and terrain can exactly duplicate a proposed area of operation. For example, if you were training up to jump on UBL’s compound, you can install reconnaissance imagery so that the operator will see the exact duplicate of the jump area. A trainee, can be made to experience any number of mishaps in any combination thereof. Wearing a headset, which allows the operator or trainee to experience the virtual reality, he or she can see teammates, as well as the surrounding area in all dimensions – up, down, left or right. The experience is as real as it gets. In dollars saved alone, it has a short payback, but where it’s worth its weight in gold is the enhancement to preparation.

The folks at STI were kind enough to let me try a HALO and I’m proud to say that I landed on the target in 10 knot plus winds – landing upwind like a gentleman. An awesome experience!

STI has also introduced a new simulation system that it calls Fused Reality®. It touts real time video and on the fly editing; digital object recognition and manipulation, virtualized training and simulation, haptics and optical tracking, integration with human and system dynamics. I had the opportunity to simulate a cargo drop form the back of an AC-130. It was an amazingly real experience. I can think of numerous applications for Fused Reality; however, one suggestion coming from STI itself, is portable door gun training with the M240-D machine gun.

Simulation is becoming a more valuable tool as systems become increasingly integrated and STI is at the bleeding edge of that technology. I was impressed by the fact that your only limitation is your own imagination.