Posted on Tuesday, 28 August, 2012 by twobirdsflyingpub 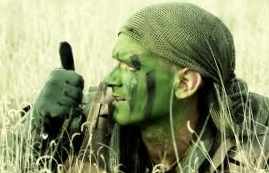 Researchers at the University of Southern Mississippi, led by Robert Y. Lochhead Ph.D., have developed a thin camouflage paint that will protect an operator’s face from the 1000+ degree heat of an IED blast.

The new camo paint is a silicon-based compound. Silicon is far less flammable than the existing oil based paint. However, the trick is not to simply provide a protective face covering; it must be pigmented in different colors and incorporate 35% of DEET in order to meet Mil-Spec requirements. A conundrum since DEET is itself flammable.  However, Lochhead and his team were able to mitigate DEET’s flammability by incorporating it in a water-rich hydrogel substance that protects it from heat.

Experiments have shown that the new camo paint can protect the skin surface for as long as 15 seconds before its temperature rose high enough to produce mild first-degree burns. Heat from IED blasts, although extremely hot, last for 2 to 3 seconds and that is well within the new face paint protective envelope.

Lochhead plans to conducted more testing on skin, with plans to expand experiments to include clothing, tents and other materials.

Like Loading...
This entry was posted in Medical, Sniper Systems and Tools, Soldier Systems and tagged Camouflage. Bookmark the permalink.