Posted on Tuesday, 16 October, 2012 by twobirdsflyingpub

Five Asian countries account for $224 billion in military spending, which is nearly 100% of defense spending in the Asia-Pacific region. The analysis excludes Indonesia who plans to spend 66.4 Trillion Rp ($6.9B), an increase of 7.5 Billion Indonesian rupiah ($782,475) over prior years, on defense. China accounts for slightly more than 40% of the regional spending.

Both industry and defense analysts look at the CAGR or Compounded Annual Growth Rate. China’s investment in its military, over the measured 11 year period has been at an at a CAGR of 13.4%. Roughly 10% per year more than the remaining 4 countries who collectively have averaged 3.425% CAGR. 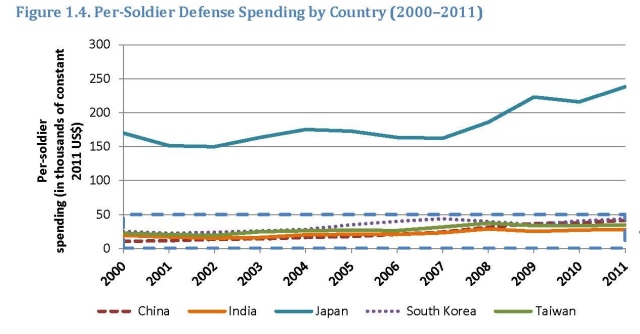 This is where the story becomes interesting, as we look at per-soldier spending among the 5 countries covered. Per-soldier spending includes training, sustainment and compensation. Excluding Japan, all other countries (China, India, South Korea and Taiwan) spend, on average, no more than $35,000 USD per-soldier compared with Japan’s $240,000 (2011). This is an good indicator of  defense priorities; suggesting the lion’s share of China’s defense budget are investments is strategic capabilities.