Posted on Saturday, 10 November, 2012 by twobirdsflyingpub 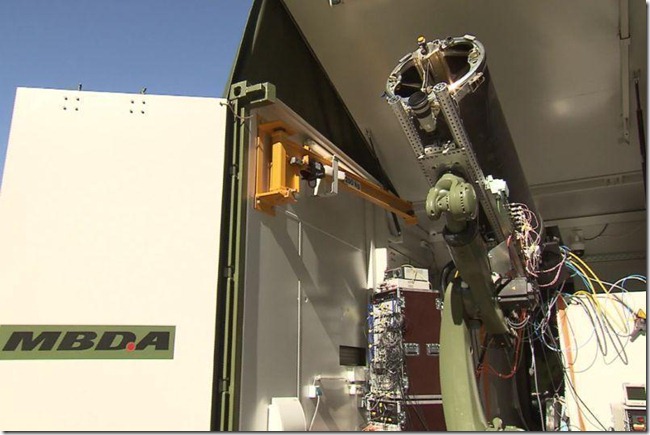 On 9 – October 2012, MBDA Germany completed a major step towards a laser weapon system capable of providing air defense. For the first time, the company’s high-energy laser was used to demonstrate the complete deployment sequence in countering rockets, artillery and mortar shells (C-RAM). Using 40 kW of laser power, the laser demonstrator successfully acted on airborne targets at a range of over2,000 m.

For these tests, MBDA Germany’s laser was equipped with a new and improved performance compact and lighter optical system  integrated in a transportable container. During the tests, the illumination and effect laser was pre-targeted using a radar (SPEXER™ 2000) and an IR optronics system (MEOS II) supplied by Cassidian. A multi-stage control system, incorporating an in-house image processing system, was used to lock onto the target at close range.

To serve as targets, the MBDA test team used artillery shell models towed in a wide variety of flight paths at an altitude of1,000 m. Function control and monitoring as well as data recording, security technology and visualization were all set up within a transportable fire control center.

The tests were conducted at the Federal Office of Bundeswehr Equipment, Information Technology and In-Service Support (BAAINBw) WTD 52 test site in Oberjettenberg,Germany. The excellent results achieved this year are a continuation of a series of successful laser tests carried out in 2010 and 2011.

Over 50 guests including representatives from the German Ministry of Defense, the Bundeswehr, the BAAINBw, the European Defense Agency, the Federal Criminal Police Office, the GSG 9 unit of the Federal Police Force and various institutions and businesses, were present to witness the successful results.