Did Someone Say 300 Blackout?

Posted on Friday, 23 November, 2012 by twobirdsflyingpub

In its latest round of small-business solicitations, the Pentagon’s Special Operations Command, or SOCOM, is seeking out subsonic ammunition. The reason, according to the solicitation, is to ”provide superior covert and stealth capabilities” for not only the military, but police forces and the Department of Homeland Security. In theory, and for rifles in the 5.56, 7.62 and .338 calibers, the bullets will travel at low enough velocities to avoid breaking the sound barrier, thus creating no “crack” noise. Breaking the sound barrier also pretty much negates the use of a sound suppressor, or “silencer,” which the special forces would likely want to use against militants in Afghanistan and around the world.

Individuals familiar with the use of sound suppressors will readily pick up on a number of issues. I took the liberty to underline one of them above. However, this is no reflection on Robert Beckhusen but rather the author of the actual solicitation, which can be read here.

“PHASE I: Conduct a feasibility study to determine if a sub-sonic concept/capability can be achieved for the 5.56mm, 7.62mm, and .338 caliber rounds. The feasibility study should determine if the following minimum performance parameters can be achieved and exceeded. The feasibility study should determine what is in the art of the possible that will maximize the following performance parameters realizing that only the minimum performance parameters are specified. The sub-sonic round must:
a. hold a velocity standard deviation of 14 or less significantly increasing accuracy and engagement range.
b. be clean burning with no unburned propellant in the gas system/receiver or in the weapon after repeated firing. No unburned propellant is the best available metric given no current military standard exists to baseline against.
c. be flash suppressed to where, in a suppressed weapon, no flash is visible.
d. provide a minimum 40 decibel reduction in sound from full velocity ammunition in a suppressed weapon.
e. have no greater than a threshold of 30 FPS shift in velocity from lot to lot while in production with an objective of 15 FPS shift.
f. maintain accuracy of 1.25 Minute of Angle (MOA) out to 300 yards with no singled shot group exceeding 1.5 MOA for a total 10 ten shot groups (5 groups fired through 2 different weapons).
g. stay sub-sonic at all temperature extremes (-40F to 165F) and functions in all USSOCOM weapons in that caliber.
h. be less than or equal to other quality ammunition for each of the respective calibers.”

How many bug-a-boos can you find in the Phase I criteria? Needles to say this solicitation should go back to the drawing table and written or reviewed by someone who understands the use of suppressors, subsonic ammunition and the physics of sound propagation.

In the mean time, I invite USSOCOM and Robert Beckhusen to visit and read my suppressor category for some much-needed background.

I would also like to encourage USSOCOM to take a close look at the 300 Blackout ammunition, which is available COTS in a full power or subsonic load. You can also read my review here. 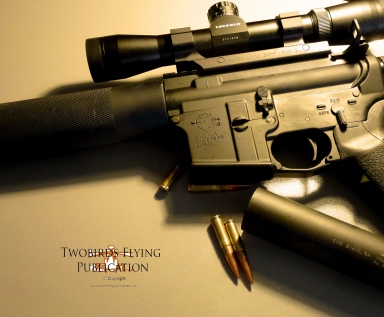