Posted on Monday, 17 December, 2012 by twobirdsflyingpub

I was reading an article posted on CNN.com titled Gun control: Change is possible – and fast written by Philip Alpers. It is a stellar example of the benighted logic that’s employed by the anti-gun lobby in America.

Alper’s article uses Australia as an example; making ridiculous statements, that we’ve all heard too often, like “…In the years after the Port Arthur massacre (1996), the risk of dying by gunshot in Australia fell by more than 50%…”

Folks if we ban aircraft it follows that aircraft death will fall. If we ban swimming less people would drown and if we ban automobiles, less traffic fatalities would occur. The real question is what impact, if any, Australia’s 1996 ban – which many Australians see as ludicrous – has had on homicides? The answer to the question I’ve posed can be found in a government report: “Trends in violent crime” prepared by the Australian Institute of Criminology and published in June 2008. 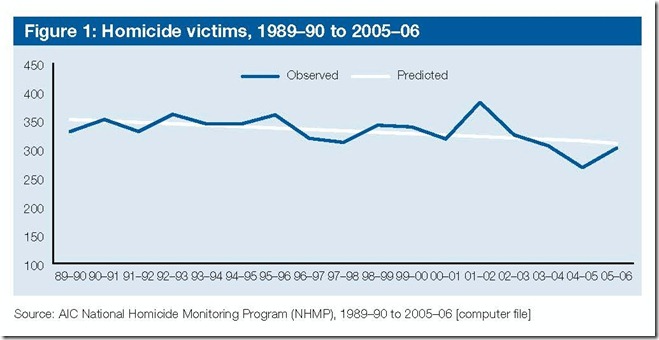 So much for “assault” weapon bans and its effectiveness on homicides. If you get into the details of the report, it suggests that statistically most homicides are committed by men and they attribute the reduction in homicides to a change in demographics – meaning less men in the population.

What happened in Newtown, CT left all Americans shocked and sadden and our hearts go out to the families in that wonderful New England Community. However, the gun-control neurosis needs to be seen for what it is. A poorly reasoned approach to dealing with behavioral problems that we are too weak to face and incapable of solving.

Change is possible but fast has only been successful at creating mediocrity. Guns are not the driving force behind the senseless violence.

Like Loading...
This entry was posted in Constitution and tagged Australia, CNN, control, CT, guns, Newtown. Bookmark the permalink.

2 Responses to The Gun Control Fallacy…