Posted on Saturday, 26 January, 2013 by twobirdsflyingpub 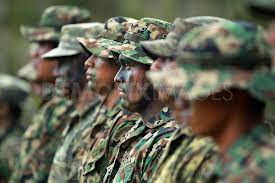 The hope is that the proposed military assistance will help Mexican President Enrique Peña Nieto establish a military force to focus on drug-criminal cartels. According to Mexican officials, warring drug gangs have killed at least 70,000 people between 2006 and 2012. The very same violent influence that contributes to an estimated 60% of all U.S. gun related violence.

The program will be based at the U.S. Northern Command in Colorado. Special Operations Command – North plans to accomplish this mission by building on existing commando programs with the Mexican Government. A noble effort no doubt. However, given Mexico’s state of affairs and the influence that drug cartels have in and around Mexico it’s likely that we will be training  soldiers for the cartels by proxy.

Tells us what you think.

Like Loading...
This entry was posted in Training and tagged cartels, drugs, Mexico, SOF. Bookmark the permalink.