Posted on Sunday, 3 February, 2013 by twobirdsflyingpub 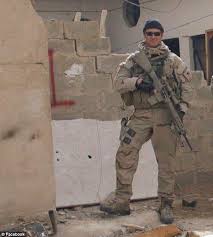 Former Navy Seal, Chris Kyle, 38 and a close friend Chad Littlefield, age 35, were murdered Saturday afternoon at a gun range in Erath County, TX.  WFAA-TV, out of Dallas Fort Worth, reported that both men were slain at Rough Creek Lodge, 53 miles southwest of Fort Worth. The suspect Eddie Ray Routh, a former U.S. Marine was captured Saturday night and arraigned on one count of capital murder and two counts of murder. Bond was set at $3 million. Routh is reported as suffering from PTSD. Kyle helped found FITCO Cares Foundation, an organization that helps treat veterans with PTSD and that’s what they were said to be doing at the range on that day.

Kyle, former Navy Seal sniper and author of the best-selling book “American Sniper,” had more than 150 confirmed kills during his military services; making him one of the most successful snipers in U.S. military history.

Chris was a gregarious and modest man who served his country with pride and dignity. Kyle was born in Odessa, Texas and is survived by his wife and two children. If anyone on the face of this earth is undeserving of such a fate it was Chris. A highly decorated sailor, family man and entrepreneur. We are all shocked by this tragic news and we extend our heartfelt condolences to his wife and children, colleagues and shipmates.