Posted on Saturday, 23 March, 2013 by twobirdsflyingpub 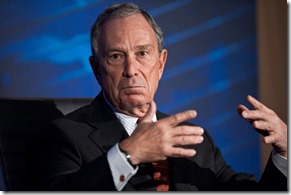 The New York Times reported today that the Mayor of the City of New York, Michael Bloomberg, is personally bankrolling a $12 million ad campaign in an attempt to influence Congressional leaders who he believes could be swayed. The ads are scheduled to run in twelve states.

Now, I suppose it’s Michael Bloomberg’s prerogative to do as he wishes with personal funds; however, it is hardly appropriate as an elected official sworn to uphold and defend the Constitution of The United States of America.

Mayor Bloomberg, every law abiding man and woman who supports The Second Amendment also supports your right not to own a firearm; it’s your choice. No one will ever subject you to that, so please don’t use your office, personal wealth and power to subjugate those that are in complete disagreement with you. The Senators that you are attempting to influence have a more solemn responsibility and that is to represent the will of their constituents, not yours. There are a million things that New Yorkers need, and would like to see accomplished, in their city, why don’t you focus your attention on them.