Posted on Monday, 28 April, 2014 by twobirdsflyingpub

In the last three years or so, considerable effort has been placed into eliminating the ubiquitous cheese grater, more formally known as the quad rail. The quad rail provides 1913 Picatinny mounting surfaces at the 12o’clock, 3 o’clock, 6 o’clock and 9 o’clock position of a free float aluminum handguard that usually required removal of the existing barrel nut and replaced by a handguard specific one. The prevailing thoughts from the local intelligentsia was that quad rails were unnecessarily heavy (questionable in my mind) and made for an uncomfortable gripping surface; needing rail covers, etc., etc.

Industry responded by introducing the key mod rail system, which uses a mechanism similar to those found on shop shelving, to attach rails along the handguard were they are precisely needed and nowhere else. The gain of course is a lighter and more comfortable mounting system.

Magpul Industries’ alternative to the key mod approach is the M-LOK. Magpul describes M-LOK as a direct attachment method for hard mounting accessories to a negative space mounting point. Now for the good news. 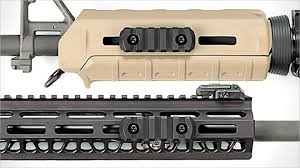 M-LOK system will be open source, meaning that it is license free and there’s at least 20 manufacturers that have made a commitment to the M-LOK. How successfully M-LOK will compete with the cheese grater or key mod system remains to be seen but if it lightens the load without compromising accessory stability it may very well be money in the bank for a lot of manufacturers.

You can read and download the M-LOK specification here.