Posted on Sunday, 1 June, 2014 by twobirdsflyingpub 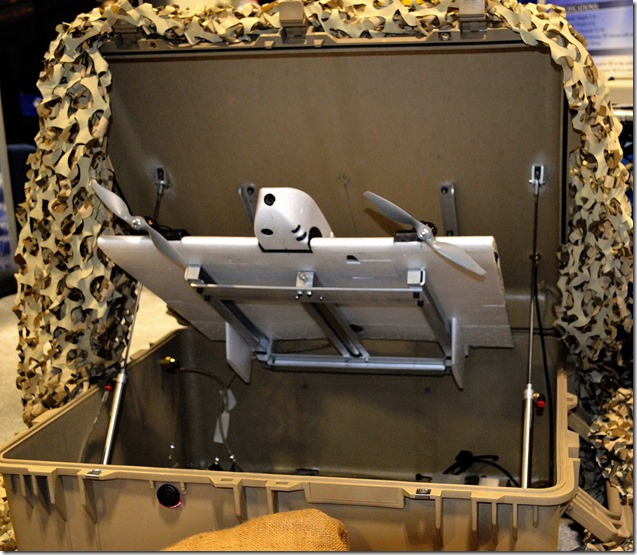 The last 12 years of uninterrupted action in Iraq and Afghanistan has ushered in a number of technologies touted as force multipliers; however, none are as deserving of the accolade as the Unmanned Arial Vehicle (UAV), but in particular man packable renditions.

Aurora Flight Science has been exhibiting their technology at SOFIC for a number of years, I’ve always perused their aircraft but I’ve been really fascinated by their Skate family of UAVs, which the company designates as SUAS or Small Unmanned Aircraft Systems. At first glance, this Styrofoam mono-wing airframe seemed reminiscent of what you would expect to find in a hobby store minus the paint and decals; however, with closer scrutiny, considerable capabilities begin to emerge.

The Skate SUAS weighs a mere 2.2 lbs. including batteries and payload, so my first question to Aurora was tell me about its operating parameters. As it turns out, this little guy can operate in 20 m.p.h gusts at an altitude of 400 feet AGL and a maximum of 14,000 feet MSL. It has VTOL capabilities, so it can hover over a point of interest (POI) or maintain horizontal flight with a maximum air speed of 50 knots. Flight operation is stabilized and autonomous using waypoints.

The available and planned payloads are also impressive…

Three aperture, full-motion video (FMV) color video cameras can be configured for up to six apertures