WHAT THE HELL IS FOIE GRAS?

Posted on Friday, 27 February, 2015 by twobirdsflyingpub

Yep you guessed it, it’s Friday and time for our weekly shoot-the shit. This is a special time when we talk and say anything that pops into our heads without the pressures that ensue from any organized or rational thought processes. It is a non-billable event, so you have nothing to loose.

I enjoy exceptional food. I’m not a glutton, but I love an excellent dinning experience. I’m especially fond of French cuisine because it’s generally very rich – lots of colors, aromas and texture; served in small portions – quality being the key objective as opposed to quantity.

Today’s LeMonde ran an interesting and, to some extent, funny story titled “ Foie gras : chronique d’une guerre” by JP Géné. BTW, LeMonde happens to be one of the best newspapers on the planet, I think it’s also available in English. The paper leans a little left, but comparatively speaking you get a fair representation of events. Back on track now… So, what the hell is foie gras?

Foie Gras is a pâté delicacy that is quite seriously controlled by the French government. In order for a pâté to be considered foie gras it must be made from duck livers but not just any duck. The duck or goose is force-fed corn using a feeding tube, the process is called gavage. These feedings occur twice per day for 12 days and three times per day for 17 days. The duck or goose is then slaughtered, and livers harvested, on the 100th – 112th day. 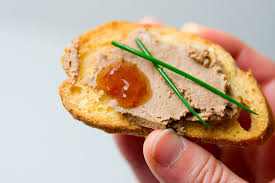 Foie Gras is amazing; ranking up there with Beluga Caviar. I like it as an aperitif with all forms of sauces but it can also be a main course, it has a very rich and creamy taste.

Well, it appears there’s a movement in France, active since 2012, to end the so called “torture” of these ducks.
Since the beginning of time, when man made his transition from nomadic hunter to farmer gatherer, societies have grown food and raised animals in captivity for consumption. Man’s quest has been to continuously improve quality and increase output, it’s how we feed the growing world populations. So, I don’t have an issue with pulling a fish out of water and watching it suffocate for minutes on end, or hearing that a duck is force-fed corn so I can have a little Foie Gras!

Do any of you sit in front of a freaking T-Bone steak and think about someone electrocuting a cow? What is wrong with these people? Farming and raising farm animals for eventual slaughter is the only reason they are here today and able to march the streets of Paris! When a farmer plucks an ear of corn, how the hell do they think the plant feels?

Well, maybe it feels like someone plucking your eye out to see if there’s a brain in there!

As always, let us know what you think and for God’s sake have a safe and fun filled weekend!