Do You Need A First Focal Plane (FFP) Scope?

Posted on Friday, 29 May, 2015 by twobirdsflyingpub

Should I get a first focal plane optic? This is a question I get all of the time, and my answer is always the same, it depends on what your intended use is. So, this week’s shoot-the-shit topic explains my rational.

There’s nothing magical about a first focal plane (FFP) optic but they sure command a higher price, and as with most decisions, you need to measure the utility of absorbing added cost against its benefit.

The FFP is a design feature found exclusively on variable power optics. Prior to their broad availability, a shooter using a ranging reticle, for example the Mil-Dot reticle,  needed to be at the calibrated magnification level to range accurately; usually that was the highest magnification setting. For example a shooter employing a 2.5 – 10 power optic needed to range a target at the 10x setting. The First Focal Plane optic does away with that requirement and allows the shooter to range at any magnification setting. It is a naturally appealing benefit right up to the point when you start to consider its non-trivial added cost. So, should you spend the extra $200 to $500 for an FFP optic? 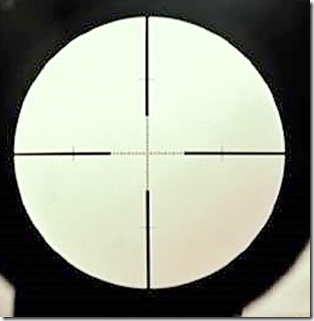 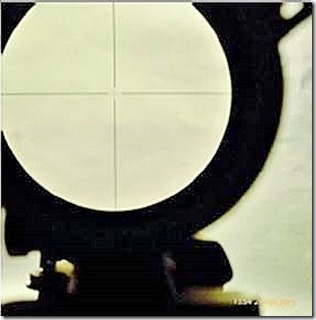 Another distinguishing characteristic is evident when sighting through a first focal plane optic, you’ll see the reticle change in size as you move from high magnification to low . The picture on the left illustrates a first focal plane reticle at the highest magnification setting, the one of the right is at the lowest magnification. Notice that the FFP reticle becomes less defined and under commonly encountered lighting conditions you can lose the reticle against the target. This is a problem you won’t encounter with a second focal plane optic as the reticle size does not change. It is this characteristic that limits, at least in my mind the utility of an FFP optic.

I have both fixed and variable power scopes. In all of my shooting experience, I have rarely experienced the need to decrease magnification on a variable power scope, actually quite the opposite. When I set up my shooting position, I turn the power ring to the calibrated magnification setting and there it stays throughout its use. This is especially true when I’m shooting unknown distances. In fact, the only reason that I’ve ever gone to say a 2.5x magnification is at close range to get the widest field of view possible and achieve a crisp target picture. My use of low magnification has never been driven by a need to range at shorter distances. This is true for any precision shooting that I’ve done with a 5.56 mm or 7.62 x 51 platform. So, for me, paying the added cost of a first focal plane optic in the magnification range of 2.5x to 10x has no real merit. Even at a magnification range of 3.5x to 15x I still need to have an overwhelming need. At 3.5x, the FFP reticle is still quite thin and easily lost and for all intents and purposes useless for ranging with accuracy.

This is a story that changes when I shoot a .300 Win Mag or 338 Lapua where my optics is a 6.5x – 20x. In this scenario, the low end of the magnification setting produces a reticle picture that is dense and well defined so it won’t washout or disappear against a target and still allow accurate ranging.

The picture on the left illustrates the FFP reticle washout at low magnifications – in this case 5x.

So, what should you get? Asses your needs and get what you need. One of the worst decisions you can make is to purchase something just in case you’ll need its capabilities.

As will all shoot-the-shits you are free to make unsupported statements, use profanity, insult anyone or change subject.

Have a great weekend readers!