Posted on Wednesday, 18 November, 2015 by twobirdsflyingpub 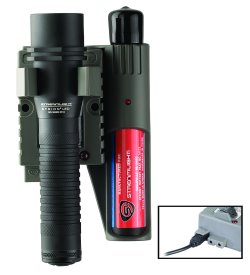 EAGLEVILLE, PA, November 18, 2015–Streamlight® Inc., a leading provider of high-performance lighting, announced that it has introduced its PiggyBack® charging system to the company’s Strion® family of rechargeable flashlights, giving users the security of having a fully charged spare battery at all times. The new, dual power input charging system permits charging through either AC/DC or USB power sources.

Designed for the Strion® LED, Strion® LED HL and Strion® HPL, the Strion PiggyBack Charger enables simultaneous charging of a Strion flashlight and a spare battery. It permits automotive, industrial, first responders and other professionals to keep working under darkened conditions, doubling a light’s run time and increasing worker productivity.

In addition to conventional AC/DC charging capability, the Strion PiggyBack charger features a USB port that enables charging on-the-go using a computer or other electronic device for added convenience.  The charger’s specially engineered micro-USB interface is specifically designed to guide the plug into place for a secure connection.

“By expanding charging options for our Strion family, we’re making these ultra-bright, compact flashlights more versatile than ever before,” said Streamlight Vice President, Sales and Marketing, Michael F. Dineen.  “Now users can always be certain they will have a fresh, energized battery when they are using their Strion flashlights.  And with the PiggyBack charger’s USB option, users have the flexibility of charging their light and spare battery from modern devices like a USB port-equipped tool box or laptop.”

The MSRP for a Strion flashlight packaged with the new charging system ranges from $229.72 to $258.18, depending on the flashlight model. The Strion PiggyBack charger is also sold as an accessory with an MSRP of $47.00 and has a two-year warranty.