IWI WILL INTRODUCE THEIR MILITARY VERSION OF THE X95 IN .300 AAC BLACKOUT AT EUROSATORY 2016

Posted on Thursday, 9 June, 2016 by twobirdsflyingpub 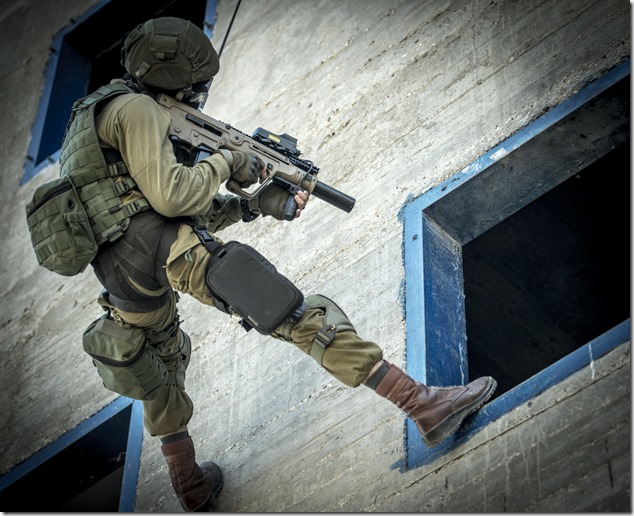 EUROSATORY 2016 kicks off 13 June in Paris. At one of the world’s most prestigious defense sector exhibit and conference, IWI will present, for the first time, the military version of the X95 assault rifle in .300 AAC Blackout caliber.

According to Uri Amit, IWI’s President and CEO, “We are currently celebrating TAVOR’s decade of successful military operation. The TAVOR became the first new generation bullpup rifle to achieve such popularity in such a short time; in only ten years it has been adopted by dozens of armies and units around the world. The TAVOR was developed in response to the evolving changes in the battlefield, which required a versatile weapon to support fighting in both Close Quarters Battle (CQB) and in open areas. Reaching the highest levels of accuracy in ranges of up to 500 meters, the TAVOR has excellent ergonomics, making it easier for the fighter to operate it on the battlefield.”

For the first time at Eurosatory, the company will present the X95 (MICRO TAVOR) assault rifle in .300 AAC Blackout caliber – making the X95 a multi-caliber platform with the ability to switch to any of 4 calibers (5.56X45mm, 9mm, 5.45X39mm, and now – 7.62×35 mm). The conversion is easily accomplished, requiring only a change of the barrel. Due to the fact that the BLK 300 and the 5.56mm ammunition have the same dimensions, they both use the same standard AR magazine. Since a wide variety of ammunition can be used for the BLK 300 caliber, the rifle can be silenced at a very high level, which is not possible with the current 5.56mm ammunition.

About TAVOR Family of Assault Rifles

IWI’s TAVOR family of Assault Rifles are versatile, innovative, and technologically advanced weapons that have been extensively proven in the battlefield, performing with precision and reliability, and meeting the needs of human ergonomics. The TAVOR family was developed in close cooperation with the Israel Defense Forces (IDF), based on experiences acquired in actual combat. Complying with the most stringent NATO standards for small arms – including operation in harsh conditions – the TAVOR is in service in the IDF Infantry and Special Forces as well as in other countries throughout the world. It has a bullpup configuration, a barrel length and weapon size that cover all soldier’s fighting ranges – from 500 meters to indoor operations, fighting from vehicles, urban areas, etc.

Like Loading...
This entry was posted in Weapon systems and tagged 300 AAC, Eurosatory, IWI, Paris, Tavor. Bookmark the permalink.