ARE THE PRESIDENT’s ALLEGATION OF A WIRETAPS UNREASONABLE

Posted on Friday, 24 March, 2017 by twobirdsflyingpub

It’s Friday and time for our weekly shoot the shit. Like many Americans, I was glued to the T.V. during Monday’s House Intelligence Committee testimony by NSA’s Director Admiral Rogers and FBI Director James Comey. Before plunging into this week’s topic, I want to thank the members of Congress who focused on the real issues, which are the unauthorized disclosure of classified information and an assessment of Russian cyber activities against the United States of America and its various organizations. What impressed me as shallow, partisan and uninformed was the  suggestions that Donald Trump’s allegation of wiretaps are lies. So, without further a do, we proceed.

When we hear the term wiretap we immediately think of government wiretaps that we’ve come to know as CALEA or FISA authorized wiretaps. Whether President Trump, in his tweets, meant government wiretaps is not clear but allegations that he’s lied to Americans is premature and irresponsible. Here’s my reason why.

Government wiretaps are technically elaborate and generally conducted at the carrier’s serving central office, be that land line or wireless service. With current technology, these wiretaps are fully computerized and undetectable by the target. However, there are other forms of wiretaps which are generally unauthorized  and illegal. Is this shoot the shit topic I’d like to show you how an unauthorized wiretap could be effected. It is but one several ways. What is useful about this method is its ease of application and the fact that it does not require access to the targets home or office. So, here we go…

A telephone requires two wires to operate, they’re referred to as tip and ring. When a phone goes off-hook, a tip and ring closure occurs allowing current to flow through the phone and subsequently carries the voice components of a phone conversation. A wire tap can be accomplished by bridging (installing in parallel) a monitoring device anywhere along the tip and ring wires. Other monitoring devices require that the monitoring device be installed in series with the phone. In all cases, access to the phone being tapped is unnecessary as long as the perpetrator has access to any of the serving wiring closets.

In multistory buildings, like the Trump Tower, there are several wiring closets, probably two or more on each floor. A building will generally have one large wiring closet at the point of entry, this is were the local phone service provider cables enters the building, this closet may also be know as the point of demarcation. In large installations, they look like the picture below.

Each pair of color coded wires represent a telephone line belonging to a phone subscriber. Running wires from the point of demarcation to individual offices or dwellings would be insane and impossible to efficiently maintain. So, in order to have a serviceable and manageable system, bundles of wires are routed via building risers to intermediate wiring closet(s) located on each floor as illustrated below. These intermediate wiring closets contain connecting points known as punch down blocks. A subscriber’s phone wires terminate on a punch down block where they connect to the phone company’s service.  It’s also a convenient point where an eavesdropping device can easily be attached. 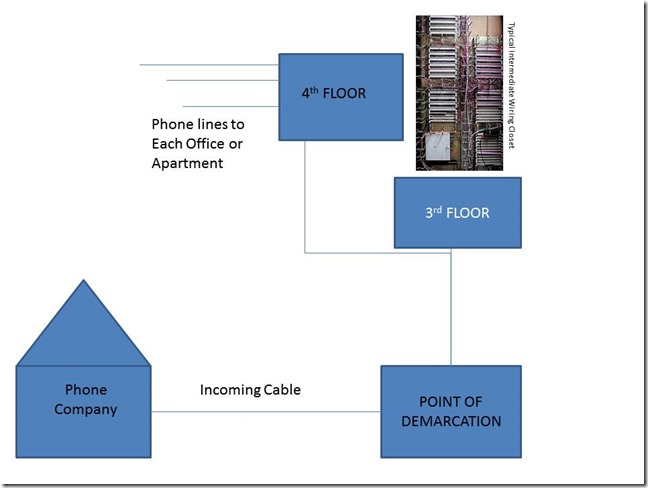 Now that you have a mental image of a building’s telephone wiring, we can talk about how the a tap is achieved.

Taps can be very simple like a cable installer or phone company technician snooping around using a lineman’s test set like the one shown on the right. The technician simply connects his device across the tip and ring wires, at the punch down block, then selects bridge or monitor mode on his headset and listens to your conversation. But who the hell is going to sit in a wiring closet for any length of time?

The more efficient wire tap occurs using a device that attaches in series with the phone line and uses an FM signal to transmit a conversation to someone tuned to the transmitter frequency. The device itself is relatively small like the one shown on the left. These devices are all commercially available requiring no licensing. Professional grade equipment is smaller and more easily disguised in a wiring closet.

These types of wiretaps are detectable by check line capacitance, sweeping the line or methods designed to detect r.f. transmission. However, it is highly unlikely that a target would know that the a tap is in place and would need a security services company to check the line. Wire closet taps can be removed without leaving a trace.

Who can effect a wire tap? Anyone with access to the wiring closet serving the targets phone. For example, a compromised or politically motivated phone company installer or service technician, a  compromised or politically motivated in-house cabling contractor or just about anyone else you could think of.  Illegal taps can’t be used for criminal prosecutions, but they could provide potentially damaging information  usable against a candidate during an election. The bottom line is simply this. If you can gain access to a wiring closet, like the ones I’ve mentioned, you can effect a tap with very little effort.

I have utter and complete confidence in the NSA and FBI and I believe these agencies did not wiretap Candidate Donald J Trump; however, it’s extraordinarily naive to believe that only government agencies can install wiretaps. In my opinion, accusing The President of making false statements regarding wiretaps ignores the possibility of unofficial and illegal wiretaps. Food for thought!

We hope you’ve found our shoot the shit interesting and informative. As with all shoot the shit topics anything goes. Have a great weekend and enjoy some quality time with your buds and family!

Like Loading...
This entry was posted in Shoot-the-shit and tagged phone tap, Trum Tower, Trump, wire tap. Bookmark the permalink.