Posted on Friday, 30 June, 2017 by twobirdsflyingpub 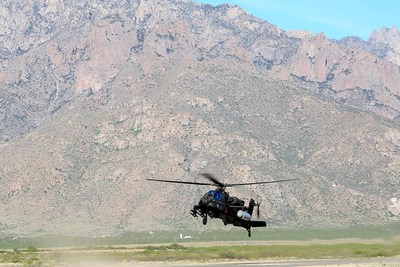 The test achieved all primary and secondary goals, providing solid experimental evidence for the feasibility of high resolution, multi-band targeting sensor performance and beam propagation supportive of High Energy Laser capability for the rotary-wing attack mission. Additionally, the system performed as expected while tracking and directing energy on a number of targets. The design of future HEL systems will be shaped by the data collected on the impact of vibration, dust and rotor downwash on HEL beam control and steering.

“Our goal is to pull the future forward,” said Art Morrish, vice president of Advanced Concept and Technologies for Raytheon Space and Airborne Systems. “This data collection shows we’re on the right track. By combining combat proven sensors, like the MTS, with multiple laser technologies, we can bring this capability to the battlefield sooner rather than later.”

In this test Raytheon coupled a variant of the Multi-Spectral Targeting System, an advanced electro-optical infrared sensor, with a laser. The MTS provided targeting information, situational awareness and beam control.