Posted on Wednesday, 16 August, 2017 by twobirdsflyingpub

At SHOT SHOW 2017 Streamlight introduced a number of new tactical and general lighting products most of which were USB rechargeable or dual-fuel; among that new lineup  was Streamlight’s micro headlamp the BANDIT.

The BANDIT is a 1.4 oz. handsfree, directed illumination lamp that offers just about all of the same features as the “tactical” headlamps at a street price you won’t believe.

Streamlight had their thinking caps on when they introduced this tiny little gem, and here’s why.

First, the BANDIT is so light you’ll forget you have it on. Second, the user has three easily accessible modes of operation; low, high and flash. On low, you have 35 lumens of a flood with a run time of  about 9.5 hours. This is ideal for many of the tasks one could perform better with a little light; for example, installing the G conversion on your Beretta 92/96 or eating in the dark. On high, you

have a bright 180 lumens with a run time of 2 hours. High is ideal for your basic recreational land navigation at your campsite or the beach. Holding the multi-function push button down for 3 seconds gets you into the flashing mode; here, the BANDIT pulses at a repetition rate of approximately 2 per seconds, so it’s a good locator beacon or emergency signal. All of these functions are easily accessible through the multi-function push button located at the top of the headlamp body. 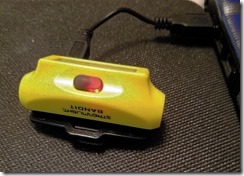 The BANDIT ships preconfigured in the try me mode so you’ll need to fully charge the headlamp to disable Try Me. Charging takes about two hours and it’s as simple as connecting the supplied USB charging cable to your USB port. The multi-function push button is illuminated with red indicating charging, and green when the charge is complete. All very straight forward!

Wearing the BANDIT is accomplished in one of two ways. First and more conventional is with the

included headband. Streamlight even lets you choose what color headband you’ll display, yellow or black. The second approach is with the included hat clip which allows you to wear the BANDIT on your ball cap. The clip articulates a full 180 degrees and will also attach to MOLLE so if you want to wear it on your vest you’ll be able to do that as well.

In closing, Streamlight’s BANDIT is one of those tools that will never outlive its utility. It’s inexpensive, available in a Yellow or Black body, multi-function, multi-role, rechargeable and takes up little or no room. You’ll want to take a closer look at the BANDIT, but at a street price of $20 or less check two out, it’s money well spent!