Posted on Thursday, 5 July, 2018 by twobirdsflyingpub 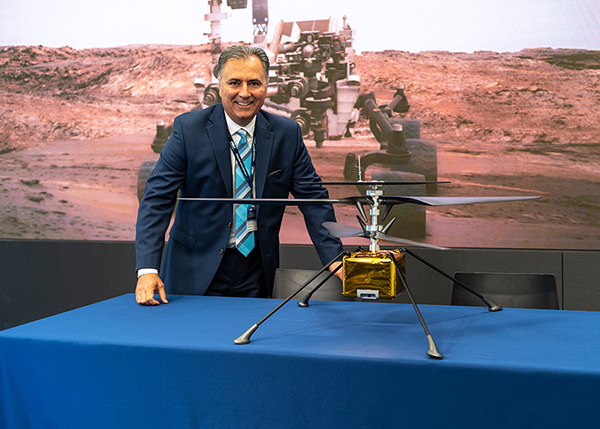 MONROVIA, Calif., July 3, 2018 – What does a company do when its trailblazing and diverse innovations for nearly half a century have redefined how the world drives and flies?  When its many technological “firsts” include the first practical electric car, flying the Nano Hummingbird drone, record-setting, solar-powered aircraft flights in near space, and reshaping the battlefield with portable, hand-held, tactical drones and loitering munitions?

It takes on another world.

At a briefing held Wednesday at New York City’s NASDAQ Marketsite, AeroVironment, Inc. (NASDAQ: AVAV) revealed its critical role in collaborating with NASA’s Jet Propulsion Laboratory (NASA/JPL) in Pasadena, Calif. to build the drone helicopter recently selected by NASA/JPL’s Mars Exploration Program, and displayed a model of the Mars Helicopter, which is planned to fly on Mars in less than three years.

“AeroVironment’s deep, rich and diverse history of innovation combined with our experience with near-space aircraft like Pathfinder and Helios make us uniquely suited to collaborate with NASA and JPL on this historic, interplanetary venture,” said AeroVironment President and Chief Executive Officer Wahid Nawabi.

Flying at nearly 100,000 feet on Earth is much like flying on the surface of Mars – same air density – so AeroVironment used airfoil design principles and simulation tools the technology company learned from record high-altitude flights and incorporated them into the Mars helicopter design.

“The Mars Helicopter effort also benefits from the ultra-lightweight and ultra-high-precision methods integral to our nano projects that have been developed in our MacCready Works laboratory, where we’ve assembled a dedicated team of the industry’s brightest and most experienced thinkers to solve some of today’s greatest technological challenges,” Nawabi said.

AeroVironment first developed subscale Mars helicopter prototypes to test and demonstrate the feasibility of lift in the thin Martian atmosphere.  Then in May 2016, AeroVironment delivered to NASA/JPL a Mars Helicopter rotor and landing gear prototype that was integrated with a JPL-developed controller and demonstrated free flight in a simulated Mars atmosphere, proving that it is possible to fly on the Red Planet.  Next, AeroVironment delivered major helicopter subsystems in the fall of 2017 for integration into Mars-representative engineering development models.  JPL built two Engineering Development Model Mars Helicopters, integrating the AeroVironment rotor, landing gear, fuselage shell and solar panel substrate together with JPL-developed fuselage composed of flight avionics, onboard power, telecom, flight control and sensors into two models.

One of the development models was used for flight demonstration in JPL’s large 25-foot space simulator, and the other for environmental testing, including thermal tests to ensure the vehicle can endure the frigid Mars nights, and vibration tests to make sure it is rugged enough to survive launch.  Both vehicles passed the rigorous tests, paving the way for the development and fabrication of the final, Mars-bound version.

AeroVironment is currently building the flight versions of their subsystems which will be integrated with other subsystems into the vehicle that JPL is building. The plan is for JPL to then install the finished Mars Helicopter into the Mars 2020 rover for its ride to a Martian landing site, still to be determined.

The press briefing featured high-impact visuals and models of many of AeroVironment’s innovations, including the Snipe™ nano drone – the latest tactical UAS innovation from AeroVironment that provides today’s defenders with critical information whenever and wherever it is needed – and the Switchblade® Lethal Miniature Aerial Missile System (LMAMS).  AeroVironment recently received Switchblade orders from the U.S. Army and U.S. Marines Corps through Urgent Needs Statements.

AeroVironment (NASDAQ: AVAV) provides customers with more actionable intelligence so they can proceed with certainty.  Based in California, AeroVironment is a global leader in unmanned aircraft systems and tactical missile systems, and serves defense, government and commercial customers. For more information visit www.avinc.com.

This press release contains “forward-looking statements” as that term is defined in the Private Securities Litigation Reform Act of 1995. Forward-looking statements include, without limitation, any statement that may predict, forecast, indicate or imply future results, performance or achievements, and may contain words such as “believe,” “anticipate,” “expect,” “estimate,” “intend,” “project,” “plan,” or words or phrases with similar meaning. Forward-looking statements are based on current expectations, forecasts and assumptions that involve risks and uncertainties, including, but not limited to, economic, competitive, governmental and technological factors outside of our control, that may cause our business, strategy or actual results to differ materially from the forward-looking statements.  Factors that could cause actual results to differ materially from the forward-looking statements include, but are not limited to, reliance on sales to the U.S. government; availability of U.S. government funding for defense procurement and R&D programs; changes in the timing and/or amount of government spending; risks related to our international business, including compliance with export control laws; potential need for changes in our long-term strategy in response to future developments; unexpected technical and marketing difficulties inherent in major research and product development efforts; the impact of potential security and cyber threats; changes in the supply and/or demand and/or prices for our products and services; the activities of competitors and increased competition; failure of the markets in which we operate to grow; uncertainty in the customer adoption rate of commercial use unmanned aircraft systems; failure to remain a market innovator and create new market opportunities; changes in significant operating expenses, including components and raw materials; failure to develop new products; the extensive regulatory requirements governing our contracts with the U.S. government; product liability, infringement and other claims; changes in the regulatory environment; and general economic and business conditions in the United States and elsewhere in the world. For a further list and description of such risks and uncertainties, see the reports we file with the Securities and Exchange Commission. We do not intend, and undertake no obligation, to update any forward-looking statements, whether as a result of new information, future events or otherwise.