Posted on Friday, 20 July, 2018 by twobirdsflyingpub

Newington, N.H. (July 19, 2018) – SIG SAUER, Inc. is pleased to announce the limited release of the M17-Commemorative Edition of the U.S. Army’s M17 official service pistol, a variant of the SIG SAUER P320. The M17-Commemorative pistol shares the same components, coatings, and markings as the firearm that was awarded the U.S. Army contract for the modular handgun system (MHS). 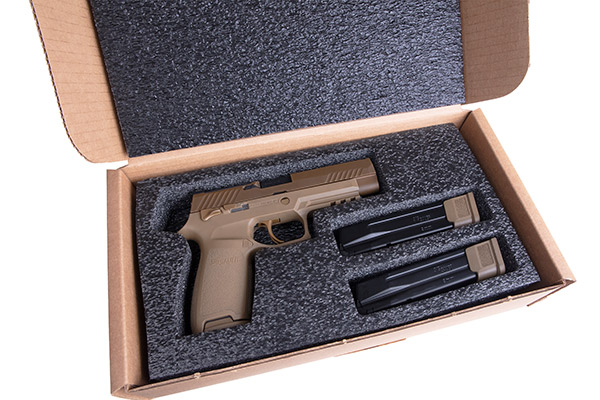 “The U.S. Army’s selection of the M17 earned the SIG SAUER P320 a place in history. It’s regarded as one of the world’s most influential firearms as it enters service with America’s Armed Forces across the globe,” said Tom Taylor, Chief Marketing Officer and Executive Vice President, SIG SAUER, Inc. “The M17 is the culmination of SIG SAUER’s steadfast commitment to providing the military with the very best, and our determination to never settle. We are excited that collectors and civilians have an opportunity to participate in this history.”

The M17-Commemorative is a 9mm, striker-fired pistol, and comes with two 21-round magazines and one 17-round magazine. The pistol features a coyote-tan PVD coated stainless steel slide with the same optic cut as specified by the MHS contract, coyote-tan colored controls just like the original pistols shipped to the 101st Airborne, and a manual safety. The M17 is equipped with a SIGLITE front night sight and removable Night Sight rear plate. The M17-Commemorative comes with a coyote-tan carry-length grip module.

The M17-Commemorative is shipping to stores in August 2018.

To compliment the M17-Commemorative, an exclusive M17 Collector’s Case is available for purchase separately at sigsauer.com/store. The case is a solid cherry box, with dark mahogany stain, a tempered glass top, a brushed nickel latch, and a keyhole back for optional wall-hanging. The M17 Collector’s Case features a slate-grey flocked foam insert with an affixed US Army logo, and precision laser placement cuts for the M17 pistol, the official serialized M17-Commemorative Certificate of Authenticity, and the serialized M17-Commemorative Challenge Coin. 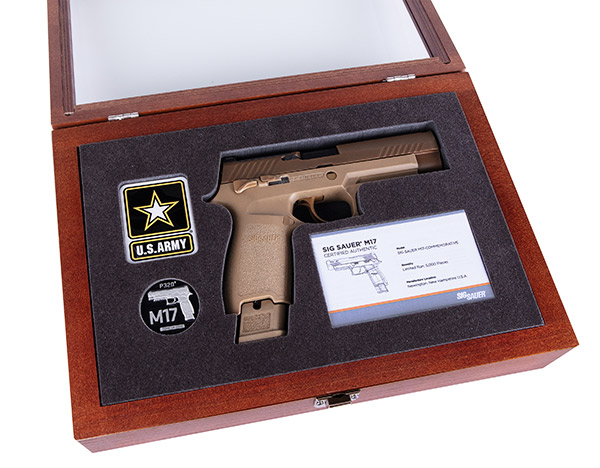