Posted on Friday, 17 August, 2018 by twobirdsflyingpub 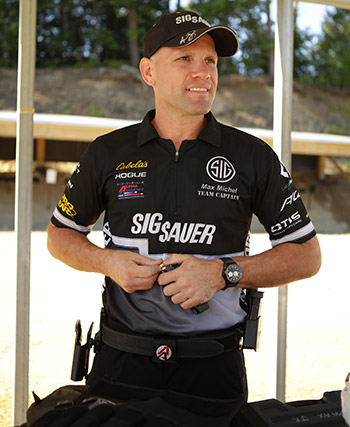 “At the IPSC Nationals the stakes are high, I was prepared, and as a result finished very strong. This was my first competition using the new SIG SAUER Match Elite Pistol Competition ammunition and it really gave me an edge,” said Team SIG Captain Max Michel. “This new competition ammunition Lena and I developed with SIG SAUER really delivered during difficult shots on both accuracy and speed. With this being my first official competition using the Match Elite Pistol Competition Ammunition I was really pleased with its performance and shootability during the fast-paced IPSC Nationals.”

To claim first place at IPSC Nationals Max competed using his P320 X5, Romeo 3 Optic, and the SIG SAUER Match Elite Pistol Competition Ammunition. The IPSC Nationals is one of four qualifying matches that will determine who represents the United States at the next IPSC World Shoot in Thailand in 2020. Max has represented the U.S.A. in the last seven IPSC World Shoots and holds seven Team Gold medals.

“Max is an exceptional competitor. He is really performing at such a high level right now and we could not be more proud, and impressed, by his wins on behalf of Team SIG,” said Tom Taylor, Chief Marketing Officer and Executive Vice President, Commercial Sales, SIG SAUER Inc. “Max works side by side with our product management and engineering teams to develop products designed for the sport of competitive shooting – clearly the formula for the Match Elite Pistol Competition Ammunition is a big winner.”

The SIG SAUER Match Elite ammunition, used by Max Michel at IPSC Nationals, is only available online at sigsauer.com/store for $29.99 per box of 50 rounds. Cases of 10 boxes will be available for purchase.