Posted on Friday, 5 October, 2018 by twobirdsflyingpub

Newington, N.H. (October 3, 2018) – SIG SAUER, Inc. is honored to announce the production and presentation of the M17 Tomb of the Unknown Soldier Pistols for the U.S. Army’s 3rd U.S. Infantry Regiment (The Old Guard) for the Tomb Guard Sentinels. 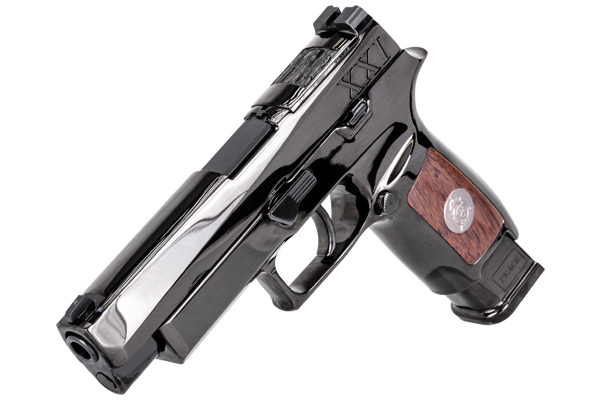 The M17 Tomb of the Unknown Pistols are unique M17 pistols that were created using the same specifications for the U.S. Army’s M17 Modular Handgun System. The ceremonial pistols are 9mm striker-fired pistols with a non-railed aluminum grip module, stainless steel slide, wood grip inserts, a 21-round magazine, and features the same optic cut as specified by the MHS contract, front night sight, removable rear plate, and black controls. The pistols also feature a high polish to withstand the inclement weather while the Tomb Sentinels stand guard.

The unique distinguishing features for the M17 Tomb of the Unknown Pistols include:

Silence, one of the four ceremonial pistols to be presented to the U.S. Army’s 3rd Guard will be on display in the SIG SAUER Booth (#3425) at the Association of the United States Army (AUSA) Annual Meeting, October 8th – 10th at the Walter E. Washington Convention Center, Washington, D.C.

A full series of photos of the M17 Tomb of the Unknown Pistols are available for viewing here.

Like Loading...
This entry was posted in pistols and tagged M17, SIG SAUER, Tomb of the Unknown Soldier. Bookmark the permalink.