Posted on Friday, 12 October, 2018 by twobirdsflyingpub

While traditional ammunition is either stopped or deflected when it hits water, Nammo’s 30 mm Swimmer (APFSDS-T MK 258 Mod 1) swims straight through water, thanks to a groundbreaking design on the supercavitating projectile developed in cooperation with the US Navy. In this article, first published in the 2018 Nammo BulletIN, design engineer Jan Hasslid discusses the implications of this new technology.

25 years ago, Norway became one of the first European countries to acquire an infantry fighting vehicle with a 30 mm x 173 gun, the CV9030N. At the same time, Raufoss Technology AS, now a part of Nammo, negotiated a contract with the Norwegian Army to develop a new generation of 30 mm ammunition. Today, with 30 mm guns becoming more prominent than ever, the experience gained through this early work has allowed Nammo, through its Strategic Alliance Agreement (SAA) with General Dynamics Ordnance and Tactical Systems (GD-OTS), to become one of the main providers of 30 mm ammunition for the US Armed Forces. Following the recent signature of agreements with the US Army and the US Navy, both services are now adopting Nammo’s 30 mm APFSDS-T MK 258 Mod 1, or “Swimmer”, for use from a multitude of platforms, including the US Army’s latest addition, the Stryker variant known as “Dragoon”. 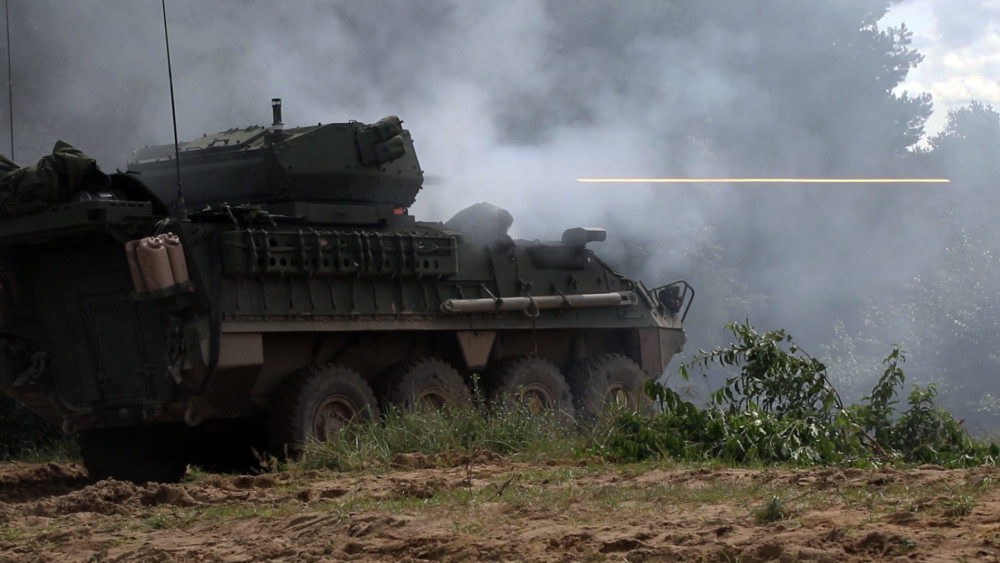 The US Army’s Stryker Dragoon will be using the Swimmer, as it has excellent capabilities against land vehicles as well as naval targets. (U.S. Army photo by Sgt. John Onuoha)

Ammunition used by vehicles generally falls into three categories – armor piercing (APFSDS), for use against other vehicles; High Explosive Incendiary (HEI), for use against lighter targets and aircraft and target practice (TP) rounds, that allow cost-effective training.

Nammo today offers ten different types of 30 mm x 173 ammunition across all three categories, ranging from plastic blank and reduced range anti-armor to multipurpose and explosive rounds, as well as dedicated kinetic energy penetrators. The Swimmer round falls into the category of sub-caliber kinetic energy penetrators. These can most easily be described as arrows made out of very heavy materials that use the force of the impact rather than explosives to punch through armor. Traveling at speeds of more than 1 km per second, the energy generated by the impact melts the armor of the vehicle into a fluid and the arrow “swims” through the armored side of the vehicle. In the case of the Swimmer, the force of the arrow is sufficient to defeat anything except main battle tanks.

Nammo’s penetrators, both for vehicles and other types of armor piercing ammunition, are made out of a super tough tungsten alloy, also known as wolfram. More than two times as heavy as steel, it has the second highest melting point of any element, making it ideal for use in armor piercing ammunition. For some ammunition types, including the 25 mm APEX for the F-35, tungsten is mixed with carbon, creating what is known as tungsten carbide. This makes the penetrators harder, but also more brittle, allowing them to fragment once they have penetrated the armor, causing added damage inside the target.

What makes the Swimmer unique, however, is the combination of powerful armor penetration and its ability to swim straight through water. This effect has until now been considered impossible to achieve by ammunition fired from air through water. As demonstrated by a number of popular science TV programs, traditional ammunition is either stopped or deflected when it hits water. In a worst case scenario, a projectile could hit the surface, bounce off and hit something else. Thanks to the design effort for the kinetic energy penetrator originally developed for the Norwegian Army, and perfected by Nammo in combination with US Navy supercavitation concepts, the Swimmer avoids the ricochet in water problem through the use of a supercavitation nose design. This means that the projectile creates a bubble of steam around itself big enough to pass through, substantially reducing the friction that stops traditional ammunition. This enables the Swimmer to be used in defense of either ships or coastal areas against submerged and surface mines, small underwater vehicles, torpedoes and even small fast attack crafts that might be concealed by waves. This is valuable not only for naval vessels, but also for land vehicles defending harbors, bridges or other key locations.

Going forward, Nammo expects that most armored vehicles armed with medium caliber guns such as the 30 mm will carry one armor piercing round, and one multirole round capable of acting as either a traditional high-explosive or an airburst round. With the Swimmer established as a leading armor piercing round, Nammo is now turning its attention towards developing a new type of programmable 30 mm ammunition that can be used against the kind of targets where the Swimmer is less effective. Based on the same technology as the 40 mm grenades that have been demonstrated against drones, this would allow fighting vehicles to program their ammunition to explode either in the air, or at a specific point inside a target. This would allow future combat vehicles to address the full range with only two ammunition types, and hence be ready for any mission, at any time.

A torpedo is generally fired in two ways:

In the video, the large foaming area indicates a torpedo firing. The torpedo is traveling towards the platform,