Posted on Wednesday, 21 November, 2018 by twobirdsflyingpub

Newington, N.H. (November 20, 2018) – SIG SAUER, Inc. is pleased to announce that it has been recognized for two of Guns & Ammo Magazine’s prestigious annual awards for SIG SAUER products. The SIG SAUER P365 pistol was named “Handgun of the Year,” and the SIG SAUER Electro-Optics Ballistic Data Xchange (BDX™) rangefinder and riflescope system was named “Innovation of the Year.” 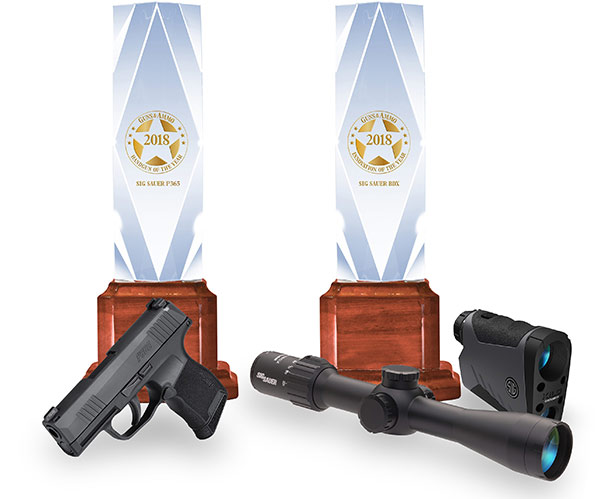 Recipients of the 2018 Guns & Ammo of the Year Awards were evaluated on the following criteria: 1) the product was new and available for purchase in 2018, 2) the product must have demonstrated quality and reliability to a degree that met or exceeded its design objective, and 3) the product must offer the greatest appeal to the masses.

2018 Guns & Ammo “Handgun of the Year”: Since its introduction in January 2018, the SIG SAUER P365 pistol has taken the market by storm, and is the top selling pistol on the market today. The P365 is an everyday, concealed carry pistol. This high capacity micro-compact pistol is smaller and lighter than other pistols in its class. It features a high-capacity, patented modified double-stack magazine for a 10+1 full-size capacity, with 12-round factory made magazines available for 13-round capacity.

“To have the P365 micro-compact pistol receive the Handgun of the Year award by Guns & Ammo magazine is really an exceptional honor, and is the direct result of the relentless drive of our engineers and product managers to push the envelope when developing new products,” said Tom Taylor, Chief Marketing Officer, and Executive Vice President, Commercial Sales, SIG SAUER, Inc. “Our goal with the P365 was to bring an everyday carry, micro-compact pistol with full-size capacity to the market that consumers could depend on 365 days a year, and this award is validation that we succeeded.”

2018 Guns & Ammo “Innovation of the Year”: The SIG SAUER Electro-Optics BDX system combines traditional hunting equipment with technology. BDX™ is a fully integrated rangefinder and riflescope system that utilizes Applied Ballistics Ultralight and Bluetooth™ to calculate and illuminate the exact holdover dot for the perfect shot. BDX™ is simple, fast, and intuitive – just connect the dot. The SIG BDX app is free and available for Android or iOS devices.

“The foundation of the BDX™ rangefinder and riflescope system is innovation, and to have the editors of Guns & Ammo Magazine recognize the rangefinder, riflescope, and app that creates the BDX system makes our entire team at SIG SAUER Electro-Optics immensely proud,” added Andy York, President, SIG SAUER Electro-Optics. “In their analysis the magazine editors really hit the mark by acknowledging BDX™ for its simplicity, speed, quality, and affordability, and further noting that when used together, it is the most advanced hunting technology introduced in many years.”

The 2018 Guns & Ammo of the Year Awards, and the full-feature articles on the SIG SAUER P365 and SIG SAUER Electro-Optics BDX™ system, are featured in the current issue of Guns & Ammo magazine.