Posted on Thursday, 17 January, 2019 by twobirdsflyingpub

FORT SMITH, Ark. (January 16, 2019) – The Axeon® Second Zero® is a precision optical device that gives any rifle shooter an instant additional zero distance whether in hunting or tactical application. It works with all optical sights from rifle scopes to dot sights.

Shooters typically zero their rifles with one consistent load at a known distance. The Second Zero provides your optic either a 4.3 or 11.5 MOA adjustment just by flipping its prismatic lens in front of your rifle scope or red dot. For many popular rifle loads this equates to an additional zero of 330 or 530 yards.
A 3×9 scope dialed in at 100 yards makes a .30-06 a versatile hunting tool. But what happens when a deer breaks through the hedgerow more than 320 yards out? While some hunters are well versed in ballistics and bullet drop, many don’t readily keep that information accessible or can recall in that short moment of “trophy opportunity”. The Second Zero offers a simple solution that eliminates the need for hold-over. There’s no complex math involved. Simply flip down the Second Zero precision lens, put the crosshairs on the target, and pull the trigger.

The Second Zero, a patented prism optical device invented by John Baker of TACOHMQ, will revolutionize the way shooters achieve accuracy at long distances. It mounts forward of a traditional scope or other optic such as a red dot or ACOG. Optics function normally when the Second Zero is not being used. When engaged, the prisms of the Second Zero, shift the image by its pre-determined MOA value to compensate for bullet drop. Simply place the crosshairs on the target just as you would at 100 yards. 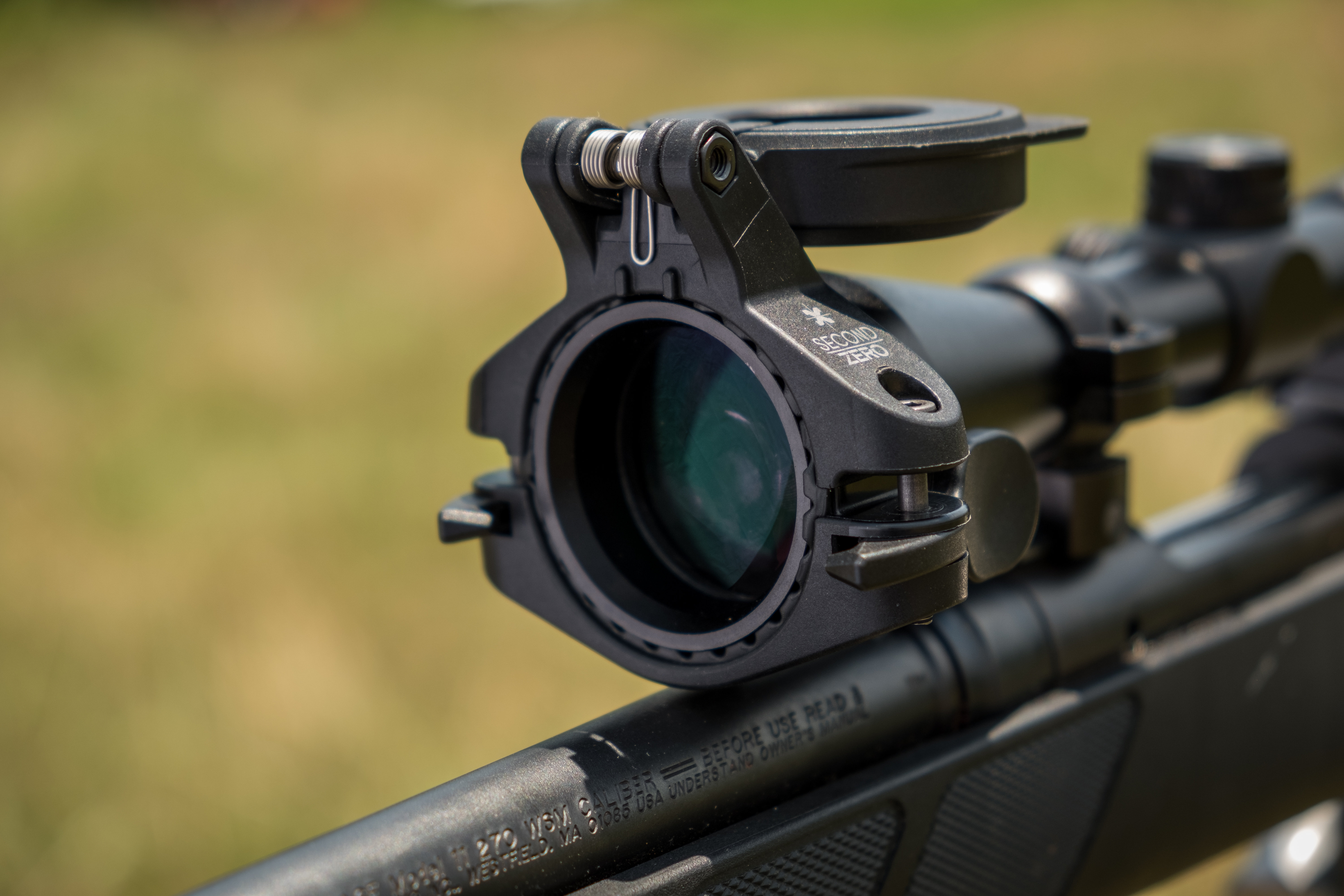 Mounting the Second Zero is simple. Attach it to the bell of a scope or install the rail mount model on available rail space in front of an optic using its quick connect mount. The prismatic lens shifts the optical image without magnification, so the size of the target doesn’t change. Because it shifts the target image optically (not mechanically) before a targeting device “sees” that image, the shift works when paired with any optic. Precision alignment is not required. The shooter sees the same image before and after the Second Zero is employed.
The Second Zero is the fastest way to compensate for bullet drop at extended range. In less time than it takes to read this sentence, and without looking away from the target, a shooter can instantly pull up the Second Zero. Available online now and from gun dealers in spring 2019 for an MSRP of $79.99.
About AXEON OPTICS
Axeon Optic Solutions is a brand of Umarex USA, Incorporated, one of North America’s fastest growing outdoor sport and recreation companies. Umarex USA innovates, develops and markets products under brands owned or licensed by its parent company, UMAREX GmbH & Co. KG. Such brands include Axeon Optics®, Beretta®, Browning®, Colt®, Elite Force®, GLOCK®, Heckler & Koch®, Hornady®, Optical Dynamics™, Ruger®, RWS®, Smith & Wesson®, UMAREX®, Walther®and others. For additional information regarding Axeon Optics or Umarex USA visit AxeonOptics.com or UmarexUSA.com.