Posted on Tuesday, 12 February, 2019 by twobirdsflyingpub

NEWINGTON, N.H., (February 11, 2019) – SIG SAUER, Inc. is pleased to announce the SIG SAUER P365 pistol and the SIG MCX Rattler have each been recognized with a 2018 Editors’ Choice Award from ON TARGET magazine. ON TARGET Magazine’s 2018 Editors’ Choice Awards are given to the, “best-of-the-best in new guns, optics, gear, and accessories,” for the 2018 product year. 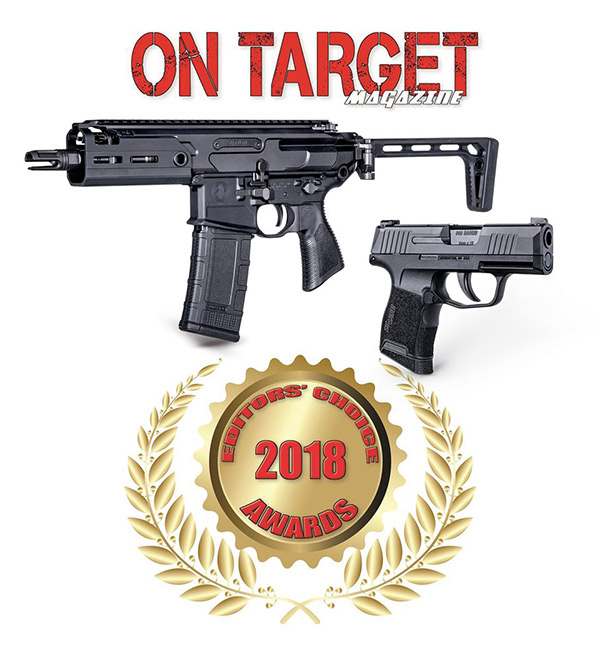 The SIG SAUER P365 is an everyday, concealed carry pistol. This high capacity micro-compact pistol is smaller and lighter than other pistols in its class. It features a high-capacity, patented modified double-stack magazine for a 10+1 full-size capacity, with 12-round factory made magazines available for 13-round capacity.  ON TARGET Editors have hailed the P365 pistol as, “in a class of its own,” and noted, “we can’t think of a better micro-compact pistol to slap the Editor’s Choice Award label on for 2018.”
Tom Taylor, Chief Marketing Officer and Executive Vice President, Commercial Sales, SIG SAUER, Inc., began, “since its introduction the SIG SAUER P365 has taken the market by storm to become the top selling, and most awarded pistol for 2018.  We are honored to have the ingenuity, reliability, and quality of the P365 recognized with a 2018 Editors’ Choice Award.”

The SIG MCX Rattler PCB is the world’s most compact rifle.  Developed for elite Special Forces, the SIG MCX Rattler is capable of firing with the stock folded from an overall length of 16”, redefining the standard for concealable firepower.  In their award of the 2018 Editors’ Choice Award, ON TARGET Editors noted that, “if you were looking for the perfect platform for an M4 “like” PDW, the MCX Rattler is it,” and, “accuracy with the Rattler has always been impressive given its compact size.”

“It’s really exceptional to have the MCX Rattler recognized for its performance, versatility, and compact size with a 2018 Editors’ Choice Award from ON TARGET magazine,” continued Taylor.  “The popularity of the MCX Rattler platform is the driving force behind the rapid expansion of this product line for 2019.  Recently, we launched the MCX Rattler Canebrake, created for the consumer that wants to run the system suppressed without purchasing additional parts, and we are set to announce another expansion very soon based on consumer feedback.”