Posted on Friday, 22 March, 2019 by twobirdsflyingpub 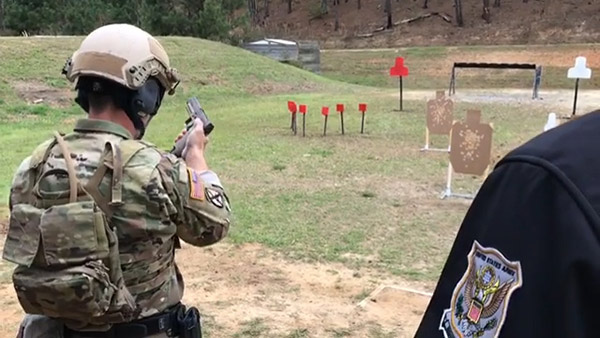 “Daniel’s win at the 2019 All Army Championship is a very meaningful win on many fronts,” began Tom Taylor, Chief Marketing Officer and Executive Vice President, Commercial Sales. “First, this was Daniel’s first win to kick-off his 2019 competitive shooting season for Team SIG, and we are very proud of his accomplishment. Second, this was the first issuing of the M17 pistol by the Army for competition, and to have Daniel, shooting on behalf of the US. Army Reserves, win using the issued M17 pistol, makes it a very memorable win that will certainly be marked in SIG’s history.”

To claim his multiple first places finishes Horner fired the National Match Course of Fire for both pistol and rifle competition, multiple team and individual matches, and the culminating event of multi-gun competition, designed to simulate combat style shooting on a course of fire that is weighted for both accuracy and speed. Pistol shots were fired at targets from 7-50 yards using the M17 pistol, and rifle shots were fired from 7-500 yards.

“The 2019 All Army Championship was an extremely challenging competition that tested both my shooting skills and my endurance. It was an honor to be one of the first competitors to run the U.S. Army’s newly issued M17 pistol in competition, and it was very satisfying to use it to win the match,” added Daniel Horner, Team SIG professional shooter . “The pistol ran absolutely flawlessly and was extremely accurate. Everyone on my team commented that they shot better with the M17, and that the pistols performance contributed to our victory. I also utilized the 21-round magazines to gain an advantage over the handful of competitors that were still using the M9 pistol which definitely worked in my favor.”

To learn more about the M17 pistol used by Horner in competition, and view the features of the civilian version of the U.S. Army’s M17 pistol, the P320-M17, visit sigsasuer.com.

Like Loading...
This entry was posted in competitions and tagged All Army Championship, M17, SFC Daniel Horner, SIG SAUER. Bookmark the permalink.