Posted on Friday, 26 April, 2019 by twobirdsflyingpub 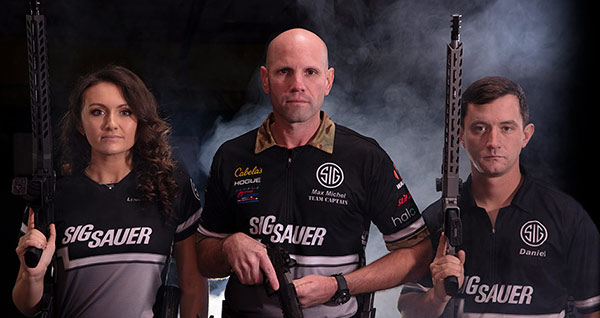 Michel, Miculek, and Horner will be available at the SIG SAUER Booth (#3912) at the Indianapolis Convention Center for photos and autographs at the following dates and times:

Max Michel, Jr.,Team Captain: Recognized as one of the most dominant shooters in the world today.  Max is a Guinness World Record holder, and International Practical Shooting Confederation World Champion, in additional to holding more than 200 additional championship titles.  Max has been competing for Team SIG for over ten years, and focuses primarily on carry optics competition.  Max is a U.S. Army Veteran and former member of the U.S. Army Marksmanship Unit (USAMU).

Lena Miculek, Professional Shooter:  Regarded as the top female 3-Gun competitor in the world, Lena has proved she’s force to be reckoned with.  She won her first world championship title at 17, and has earned 75 championship titles since.  In Pistol Caliber Carbine Competition (PCC) Lena is breaking barriers for female professional shooters; at the 2018 USPSA Nationals she became the first female to earn a top five finish in PCC and was the first female to win Master Class for PCC.

Daniel Horner, Professional Shooter: The Newest member of Team SIG, Daniel Horner is a multi-disciplined world champion shooter with over 125 championship titles that competes primarily in 3-Gun Competition.  A U.S. Army Veteran Daniel was recruited to the Army to join the U.S. Army Marksmanship Unit (USAMU) Action Shooting Team where he became one of the most decorated shooters in team history.  Recently, Horner was the Match Champion at the 2019 All Army Championship, as a member of the U.S. Army Reserves using an M17 pistol.