Posted on Tuesday, 2 July, 2019 by twobirdsflyingpub

NEWINGTON, N.H., (July 1, 2019) – SIG SAUER, Inc. is pleased to introduce ground-breaking innovation to the P320 pistol, and the expansion of the SIG SAUER Legion Series of pistols with the SIG SAUER P320 XFIVE Legion. The pistol features the exclusive TXG grip module developed by SIG SAUER engineers with a patent-pending process by infusing tungsten into the polymer material providing the weight of steel with the flex of polymer. Additionally, this is the first striker-fired pistol to be introduced to the Legion Series of pistols. 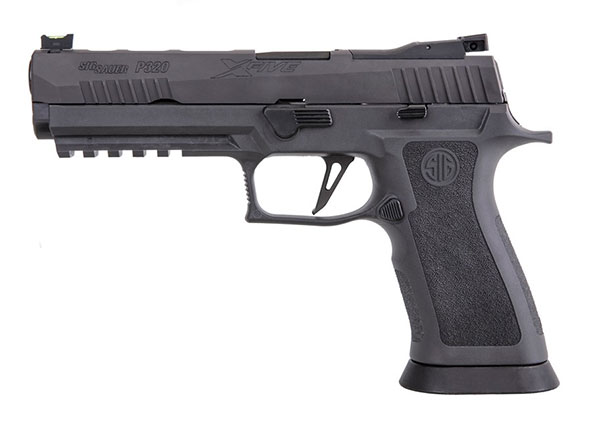 “We are really excited about the introduction of the SIG SAUER P320 XFIVE Legion to the market because it embodies the forward-thinking SIG SAUER mindset when it comes to product development,” said Tom Taylor, Chief Marketing Officer and Executive Vice President, Commercial Sales, SIG SAUER, Inc.  “The P320 XFIVE Legion is defining innovation and changing the game for competition pistols, and it’s these exclusive features that are designed to enhance the shooting experience that our Legion members have come to expect from us.  The grip module is heavier, substantially reducing felt recoil and muzzle flip, and the newly developed trigger reduces pull weight by up to 30% for a crisp, fast shooting experience – and that’s just the start.”

The SIG SAUER P320 XFIVE is a 9mm striker-fired pistol, with the TXG tungsten infused heavy XGrip module, a Legion Gray PVD Slide with lightening cuts, 5” match grade bull barrel, and a lightened and skeletonized trigger.  The recoil assembly of the P320 XFIVE Legion has been upgraded to include a one-piece stainless steel guide rod and a 14lb. 1911-style spring, plus an extra 12lb. spring, allowing the end user to easily adjust the recoil spring for a customized shooting experience.  The pistol comes optic ready and is compatible with a SIG SAUER Electro-Optics ROMEO1PRO Optic or a standard DeltaPoint Pro Optic, features Dawson Precision® Fiber Optic front and adjustable rear sights, and comes with three 17-round magazines with anodized aluminum Henning Group base pads.