Posted on Wednesday, 24 July, 2019 by twobirdsflyingpub

A muzzle brake’s job is to help a shooter recover from their rifle’s recoil. The benefits are many: More comfortable shooting, the ability to spot your own shots at long range, or the difference between 1st and 5th place in a 3-gun competition where tenths of a second add up.
So, how does a muzzle brake work? In broad terms, once the bullet it up to speed, the rest of the propulsion gasses are wasted to atmosphere once they leave the confines of the barrel. Some smart guys (John Moses Browning and Hiram Maxim for two) figured out ways to harness this “wasted” gas and put it to work in operating guns “automatically,” but that is a whole other story. Muzzle brakes utilize the same wasted energy, but instead apply it to pull the rifle forward and reduce the upward and lateral movements that happen when shots are fired. 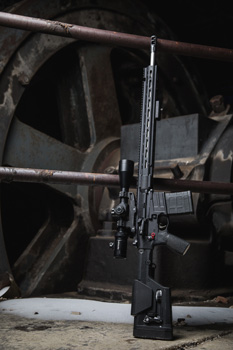 How They Work
Muzzle brakes (the good ones anyway) all have several vertical (most often curved) baffle surfaces. As the bullet passes through the hole in the baffle, the gas behind the bullet impacts the surface of the baffle wall and this pulls the muzzle forward. How many baffles is up to the designer, and that is all too often done for looks alone. The idea is to maximize the gas expended while keeping our muzzle appendage within a size and weight range that makes sense. Smaller cartridges generally have less gas, so less baffle surface area is needed.
Now we come to gas vectoring. In simple thinking, some of the exit gas is pointed in a direction to assist the shooter in recovering from the gun moving in that direction. Here’s how that works. The bulk of the gas impacts our baffle plates and pulls the rifle forward. Some brakes have holes in the roof that let gas escape at 1 or 2, but generally at 12 o’clock. While that is considered vectoring gas, we might not get full value from just a hole or three drilled for looks. Much depends on where and what size hole, but there is another way, and Savage has incorporated in thusly.
Pressure Ports & Jet Effect
First, consider what happens when you take a large volume of gas, capture it in a pressure area and force to get out through a small port. The gas entering the pressure area wants out as fast as it can. That gas moving through the small port acts like a turbo thruster, or “jet,” that works to move the gun the opposite direction as the gas. Think of a garden hose with a small nozzle.
The pressure area on the new Savage muzzle brake is located at the end of the barrel closest to the muzzle. This captures the gas at the highest pressure, and because the gas is captured and released over a longer period (remember the exit is smaller than the entrance so the gas is effectively slowed down a bit) we leave plenty of gas for the baffles to do their thing.
Custom Tuning
The new Savage muzzle brake sports two jet ports at 12 and 3 o’clock. These can be incrementally drilled out to effectively tune the gun/ammo to the shooter’s liking. Go slow in increasing sizes and only do one port at a time. Check your results. You don’t have to be overly scientific. You need to feel confident in tuning your rifle for you. It is all about how your rifle fits and feels—to you.
What Makes It A New Savage Muzzle Brake?
Savage’s method for attaching the muzzle brake to the barrel is yet another point of distinction. Usually, the barrel is threaded and the brake is screwed on against a crush washer, or a locking nut is used.
However, the new Savage muzzle brake uses a more elegant method, with the nut attached to the brake and threads against the barrel shoulder to lock it in place. The system enhances accuracy by perfectly aligning the centerline of the brake’s bore to the rifle bore.
In most cases, shooters—and manufacturers for that matter—rely on both the brake’s rear bearing surface and the shoulder left during the barrel threading process to be perfectly perpendicular to the bore. When this is true, everything works just fine—but it doesn’t always happen that way.
Savage has left nothing to chance, going a step further in using two alignment elements to ensure and maintain alignment. A male “radius cone” is machined onto the muzzle end of the barrel and a commensurate female element is built onto the new Savage muzzle brake. When pulled together by the attached locking nut, the brake is self-centered for accuracy
A Brake for You!
The new Savage muzzle brake is not some looks-only, holes-aplenty muzzle attachment. Savage has carefully considered this like they did before they introduced the MSR series. It does exactly what the name implies—enhancing accuracy and braking. And the only way you can get one is on a Savage rifle.
In the author’s quest for the right muzzle brake for 3-gun competition, he took it upon himself to create his own testing devices and criteria. The data collected from those efforts ended up being fodder for a pair of articles in the USPSA’s Front Sight magazine. To read them, visit www.multigunmedia.com and check out AR Muzzle Brakes 1 and 2.