Posted on Friday, 23 August, 2019 by twobirdsflyingpub

TGIF readers! You made it through another week and it’s now time to kick back and relax over the weekend. I now know what Noah felt like, this week has been non stop rain so I’m ready for a good shoot the shit. Remember that a shoot the shit is a social interaction  in which everything and anything is open to discussion. Participants don’t need to know anything about the topics being discussed, they can also use uncensored profanity, insult anyone the wish or change the subject all together. Shoot the shits enhance social interaction skills and save you the $150+ per hour you’d have to pay individuals that studied psychology so they could understand themselves.

Man there is all kinds of stuff to shoot the shit about!

The Democrat Congress is on the “ban assault rifles” charade once more. I’ve reached the conclusion that Democrats legislate by anal extraction. Instead of confronting the reality that long guns, like the AR15s, account for about 1% of all gun homicides, they want to implement legislation to ban the most popular rifle in U.S. history. I love the “buy back” nonsense being discussed. What are they going to do, pay $100 for someone’s $5,000 AR15? That makes a lot of sense does it not? I’ll tell you what it does! It confirms that someone that stupid has no business being part of the legislative body of the most powerful country on the planet. In a category all of her own is Congresswoman Alexandria Ocasio-Cortez.

She actually takes a drive through a desert area to show that this part of the country, which is a sparsely populated region, doesn’t need representation. She was trying to prove that the Electoral College should be abolished. Watch the video below. It’s hard to come up with civil discourse to adequately  capture her level of ignorance. Amazing!

Now for a more interesting topic.

I often get e-mails from readers asking for information on specific things. One that comes up from time to time, usually from HK and Steyr owners, are on the Hensoldt-Wetzlar 10×42 ZF 500 and ZF 800 rifle scopes.

Both of these scopes were produced in 1995 as a special order from the United States. Hensoldt produced and shipped 500 units of each model; sold to an undisclosed customer. The ZF 500 is a 25mm tube with an overall length of 300.6mm (depending on the diopter setting). The ZF 500  is calibrated to the .308 Win round (which I believe to be the FGMM 168gr ). Hensoldt did something interesting with the elevation turret (see the picture below).

They calibrated the turret in meters and not MOA, so as shown above you’d be engaging a target at 300 meters. Do not confuse the markings with yards!

The ZF 500 is cammed from 100 meters to 500 meters with 50 meter increments. Elevation is adjustable in .25 MOA increments. The reticle is a USMC mil-dot 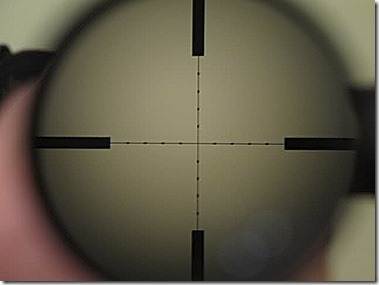 The ZF 800 is exactly like the ZF 500 with the following exceptions:

I hope you enjoyed our shoot the shit. Have a great, and hopefully dry,  weekend; as always, be safe and try to spend some quality time with your buds and/or family