Posted on Monday, 10 February, 2020 by twobirdsflyingpub 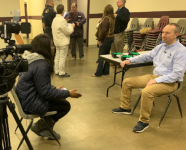 MINNEAPOLIS, Minn. – February 7, 2020 – The FACT Duty™ Weapon-Mounted Camera (WMC™) from Viridian Weapon Technologies made history in 2019 as it recorded an officer-involved shooting (OIS) in Texas. This is the first OIS in the world captured by a gun camera, and Viridian representatives have been informed that the gun camera footage will be one of the key pieces of evidence in a trial scheduled for next week.
“Body cameras can be obscured during confrontations, and we often hear of officers failing to activate these body-worn devices,” said Viridian President and CEO Brian Hedeen. “However, an officer’s gun is out front where it is less likely to be blocked, making the Viridian WMC an ideal alternative or supplement to traditional bodycams. During this recent shooting, the gun cam automatically activated when the weapon was drawn from its holster, and HD footage was captured of the entire incident. This is the first real-world officer-involved shooting captured by the WMC.”
Viridian’s WMC has rapidly become a vital tool for law enforcement. This advanced device provides an unobstructed view of critical use-of-force events from the end of the firearm, addressing limitations officers can face with body cameras. Body and dash cameras were not designed to capture officer-involved shootings. However, Viridian WMCs were designed specifically for this purpose.
The highly advanced WMC employs a 1080p full-HD digital camera with a microphone and 500 lumen tactical light. Viridian’s proprietary INSTANT-ON® technology automatically activates the camera and microphone whenever the officer draws the firearm from its holster. Not only does this eliminate risk of failure to manually turn on the camera during a critical event, but it also keeps the officer from fumbling with cumbersome equipment.
More information on FACT Duty WMCs can be found at ViridianWeaponTech.com/FACT-Duty-Learn-More.

About Viridian Weapon Technologies
Headquartered in Minneapolis, Minnesota, Viridian Weapon Technologies is devoted to applying cutting-edge technology to design compact, powerful self-defense products for the civilian, military and law enforcement markets. Viridian is the leader in weapon-mounted technology and responsible for a number of firearm innovations including green and red laser sights, LED weapon-mounted illuminators and several shooting accessories including the TacLoc® Holsters. Viridian products are designed and built in the USA. More information is available at ViridianWeaponTech.com.