I got toilet paper, ya know chico

Posted on Friday, 27 March, 2020 by twobirdsflyingpub 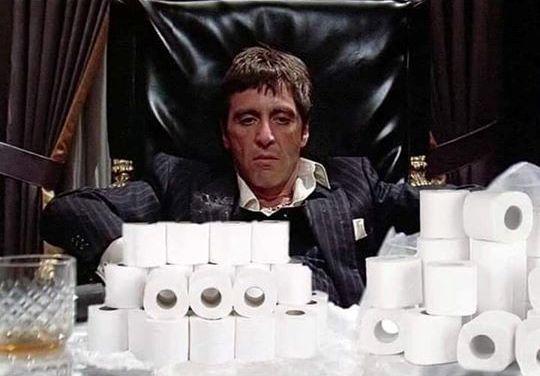 Hey, it’s Friday and time to think about sitting at home for the weekend. I’ve got a number of reviews that require range time but I’m in compliance with federal and state guidelines until this COVID 19 problem comes under control. I usually like to ask readers if they had a productive week but most of you are in the same situation as I’m in.

I do want to thank those of you intelligent enough to comply with the CDC’s isolation directives, your actions will bring the advance of infections to a grinding halt, but sadly we find jackasses in our midst who don’t think the CDC knows what they’re doing. They go out and lick products on store shelves, congregate, coordinate bike rides, hold corona parties on and on, it’s enough to make you go out and sign up for tele-therapy but STOP, instead have a shoot the shit. It doesn’t need to be a face to face social interaction, you can do it using conference video calls. Using tele-therapy to help you decompress, will put you in the hands of a jackass who studied psychology so they could understand themselves. They’ll charge you $150+ per hour to tell you the reason you’re stressed about the Coronavirus is because you fear ending up in the hospital where they’ll determine that you have a small penis. So, lets shoot the shit.

One of my readers shared a video that had me rolling on the ground laughing. It is a bit risque’, but what the hell, it has enormous therapeutic value and costs you nothing. So, here it is…

We are living through some weird times but keeping the sweat pumps in low speed is the way you want to live because it ensures clarity of thought. There’s absolutely no need to go out and buy every roll of toilet paper you can find or every round of ammunition for that matter. If you’re worried about a North Korean invasion, know they would attack California first where they would be issued a drivers license, placed on Medicaid and given food stamps.

Here’s what you need to be concerned about, individuals not following state and federal isolation directives, just look at what is going on in New York City.  Be concerned about the influx of New Yorkers leaving the state to escape the pandemic, which is sure to ignite or accelerate infections in the southeastern states.

Don’t be overly concerned about the economy it will recover if you the consumer remain positive and if we succeed in curbing the spread of the virus through our isolation.

In closing, let me share a picture sent by a reader that’s appropriate to the times. I’ll describe it borrowing from Frederick R. Barnard who published a piece commending the effectiveness of graphics in advertising with the title “One look is worth a thousand words“, December 1921. Have a great weekend and be safe.