Posted on Friday, 7 August, 2020 by twobirdsflyingpub 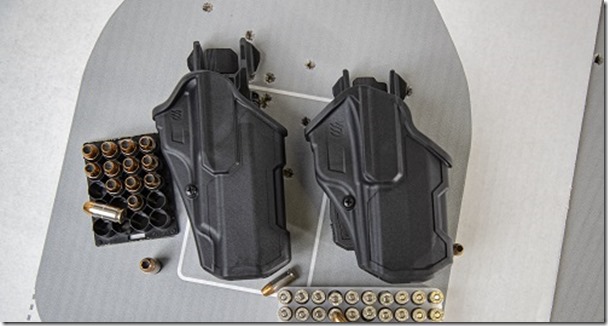 VIRGINIA BEACH, VA – August 6, 2020 – Blackhawk™, a leader in law enforcement, military and shooting sports for over 25 years, announced today that it has expanded its popular line of T-Series holsters with the introduction of the Level 2 Compact (L2C) models specifically engineered to accommodate Colt 1911 and Springfield XD pistols.

The new dual-injected molded holsters are available in a right-hand configuration. Like previously introduced Blackhawk models, the L2C holster is designed to provide users a compact holster with level 2 retention. Each holster model is standard with a new speed cut to help with a faster draw and features a low-profile design for ease of concealment. The L2C holster is also RDS-compatible, giving users the ability to add a red dot to their carry firearm.

Blackhawk L2C holsters are duty-rated and come standard with an all-new Quick Dual Release (QDR) attachment method. Using an intuitive button release, the QDR allows the holster to be easily added and removed from a belt without weaving it through traditional belt loops. The QDR can easily accommodate belts ranging from 1.5 to 2.25 inches. In addition to the QDR attachment, all T-Series L2C holsters come standard with a 2-slot belt loop. The 2-slot belt loop has an asymmetrical design that tucks the grip of the handgun towards the body for improvement in concealment.

As the world’s first thumb driven, dual-injected molded holster, each T-Series holster is standard with a soft touch inner layer that is both super slick and sound-dampening. This durable and efficient, low-friction design translates into a smooth, quiet draw or re-holstering of the sidearm.

Designed to follow Blackhawk’s Master Grip Principle, all T-Series holsters have been specifically developed to allow the user’s hand to land naturally where it should in order to deploy the sidearm.

For more information on the new L2C holsters for the Colt 1911 and Springfield XD pistols, or to view the complete line of T-Series holsters, visit www.blackhawk.com.

About Blackhawk
In 1990, a Navy SEAL was navigating a minefield when his pack failed. As his gear tumbled to the ground, he vowed that if he got out of there alive he would make gear the right way. Today, this obsession with quality applies to everything we do. We’re constantly researching, refining and perfecting every detail to provide gear that won’t let you down. Because we’re not just making stuff – we’re honoring a vow.