Posted on Wednesday, 2 September, 2020 by twobirdsflyingpub 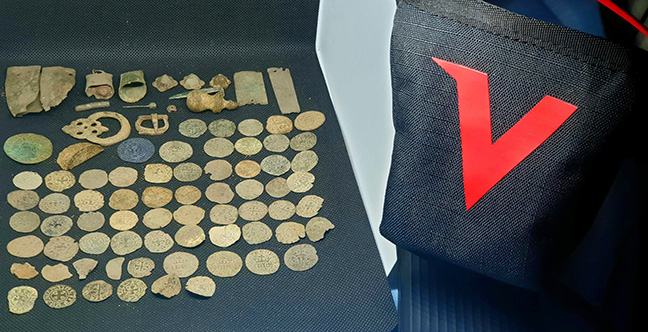 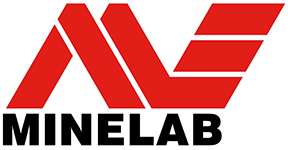 Chicago, IL (September 1, 2020) – From the time one picks up his or her first metal detector, detectorists dream of making “the big find”. Big means different things to different people. Some aspire to find a huge gold nugget in a dry creek bed. Others hope to discover an unhunted Civil War battlefield full of bullets, buttons, and buckles. For some, a recovered diamond ring would make them happy. Others dream of finding a posthole bank containing a can of gold and silver coins.

Who knows exactly what sort of “big find” tops one particular European detectorist’s list. For this man, who wishes to be referred to in this article simply as Fabio, one of his recent discoveries must certainly come close.

The European countryside is a special place where thousands of years’ of historical items have been lost, just waiting to be found. Some people – like Fabio – are fortunate to be able to search there on a daily basis.

In February of 2020, Fabio and one of his friends were detecting one of the many large farm areas on which they have permission to hunt. They had been searching all day. “It was raining like crazy. We were very exhausted from walking many miles with no good signals,” recalls Fabio, who had decided to return to the car to escape a downpour when his friend suddenly began frantically yelling that he had just found several billon (a silver/copper alloy) hammered coins.

“I rushed back and turned on my Minelab VANQUISH detector equipped with the 12” coil and started swinging,” says Fabio. “The area had many pottery fragments and the soil was dark and heavily mineralized, but the VANQUISH easily overcame the difficult conditions.” Fabio began getting good signals. “One coin, two coins, three coins… 11 coins! Coins all over the place!” he recalls. Imagine his excitement. 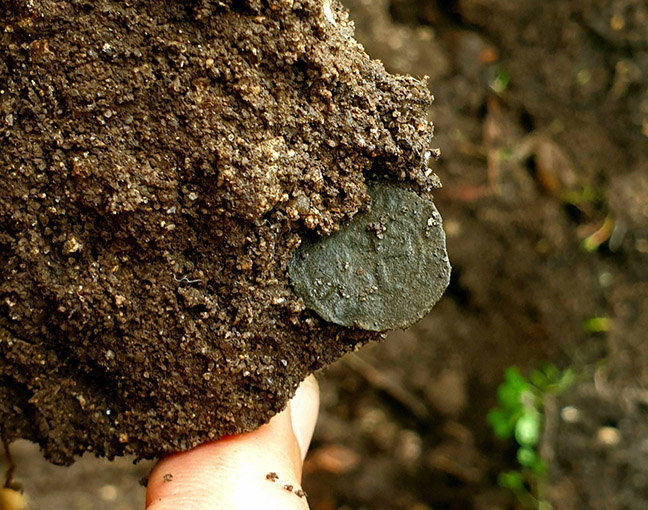 The coins the two men were finding were hammered coins, mostly from the 14th century. For those who may be unfamiliar with hammered coins, Fabio explains: “The dies for both sides of a coin were made from hard metal, then a softer coin blank was centered between them and then struck with a hammer to leave the coin impression on both sides.”

A half-hour later, the detectors were still sounding off, but both men were cold, wet, and exhausted from digging through 6-to-8 inches of muddy topsoil. They marked the spot and made plans to return the next day under better hunting conditions.

The next day found Fabio and his friend back in the field, full of renewed energy and excitement. They had brought along an additional friend to share in the fun.

Fabio started the day with the eight-inch coil on his Minelab VANQUISH and planned to change to the 12-inch coil later in the day to reach the deeper coins. He began detecting over an area previously covered by his friend the day before, and quickly began getting signals which had been missed. The machine his friend was using was not as sensitive or able to detect the deeper coins Fabio was finding with his VANQUISH – even with the eight-inch coil. 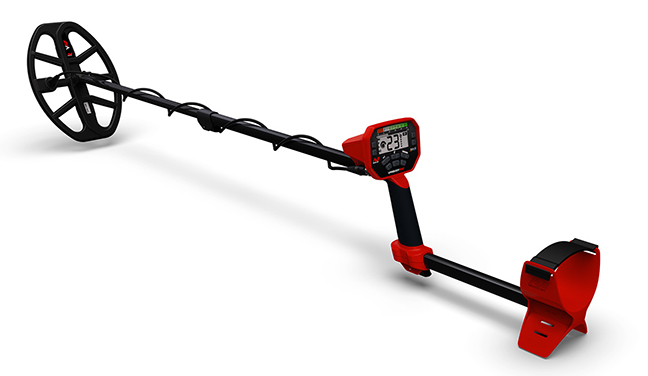 A short time later, Fabio heard one of his friends shouting. He had uncovered a rare hammered coin with a King Ferdinand bust, and all three men rushed to celebrate the find. Soon, Fabio had a signal reading higher than what he had been getting with the small, thin hammered coins. It was a beautiful coin similar to the one his detecting friend had just found. In his excitement, however, Fabio failed to recheck his hole. When his second friend went over that area again a short time later, he detected and uncovered another rare hammered coin Fabio had missed. But Fabio didn’t mind. “At the end of the day, we were completely exhausted but also extremely happy!” he says. “Without a doubt, it was one of the happiest days of our lives!” 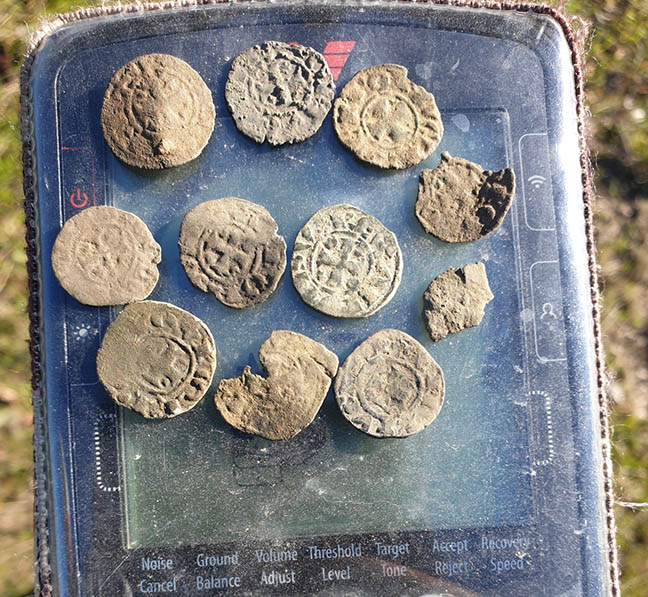 Fabio and his two friends returned the following weekend to resume their hunt. This time, he took his Minelab EQUINOX 800 to see how it would perform on the site. It did great, as he continued to discover new coins. “I found 66 coins with the VANQUISH, and 43 more when I went back with the EQUINOX and its stock coil,” he says. “As the finds started slowing down, I switched to the EQUINOX with the 15-inch coil and found 14 more!” 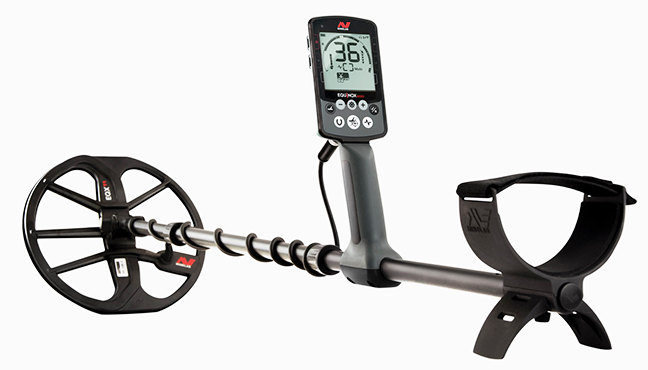 Fabio continued changing coils and his Minelab machines and hunted for a total of five days. All told, his extraordinary discovery totaled an astonishing 128 coins.

The area the men were hunting was a farm field close to a river. The total area they had permission to hunt on was about one square mile, and the specific area where the coins were found was around five acres. But why were they there?

The trio had discovered a lot of pottery pieces in the ground, so perhaps a large pot – or several pots – had been filled with coins and buried. Agricultural activity could have easily scattered the coins. And while that may be the most logical explanation, Fabio has other theories as well. “It could have been from a shipwreck since the nearby river flooded into this area on occasion,” he says. “Or it might have been from a military encampment from that period.” Later in their search, the men also found some 16th and 17th century coins, further complicating the mystery surrounding this fabulous hoard.

While Fabio, 31, is a passionate detectorist, he hasn’t been treasure hunting for very long. When he was young, he enjoyed going to the beach and searching for fossils. Three years ago, he was invited to a metal-detecting group event and looked at all the exciting finds people were discovering. Shortly thereafter, he bought his first detector. Amazingly, he found a Spanish reale on just his second day detecting. The excitement took over, and he has been at the game ever since.

Fabio has experience with several different makes and models of detectors, but chooses to hunt today with Minelab’s CTX 3030, EQUINOX and VANQUISH models, citing Minelab’s Multi-IQ simultaneous frequency technology as a game-changer for both beginning and experienced detectorists. “Multi-IQ means you can search with multiple frequencies at the same time and find any metal in any soil conditions,” he says. “It’s a great feature that helps people make more finds.”

Fabio is still researching the value of the coins and doesn’t yet know what he will ultimately do with this find of a lifetime. 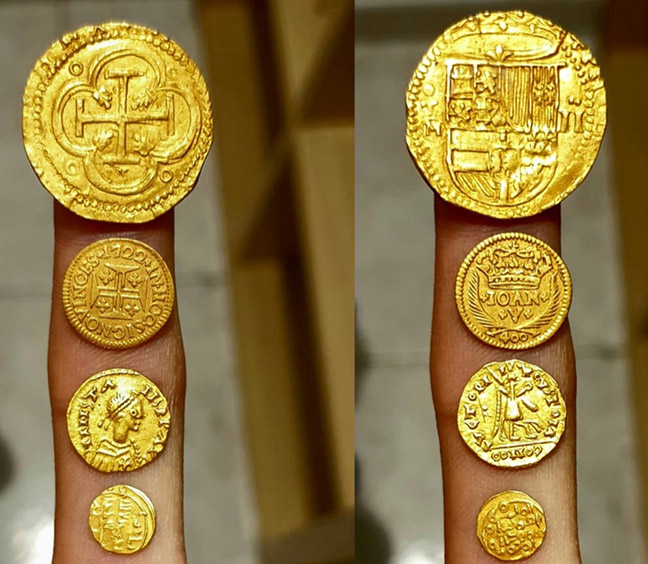 “The value of this find in monetary terms is unknown at this time,” he says. “But in terms of personal satisfaction in obtaining a find of this age and quantity, it is priceless!” And that’s what this story is all about – the fun, the excitement, and the dreams that come with detecting – along with showing beginning or would-be detectorists what they can do with a well-chosen and well-engineered metal detector like the Minelab VANQUISH. It’s an inexpensive, easy-to-use-and-understand machine that can make dreams come true.