Huey P. Newton and Bobby Seale Would Be Pissed

Posted on Friday, 18 September, 2020 by twobirdsflyingpub

T.G.I.F. we are at the end of another week signaling that we are closer to the November 3rd elections and Christmas. I hope you’ve all had a great week as difficult as things may be. I took a little bit of time to reflect on the events of 9/11 2001. I still remember what I was doing. I was supposed to have traveled on that day. When I saw the news feed of the second aircraft striking the Towers I called Delta to confirm my flight; they informed me that all flights were cancelled. What a day! It’s for that reason that I  didn’t publish a shoot the shit. Now that this is behind us, let’s have a shoot the shit.

If your new to this site, you’ll want just a quick overview of what a shoot the shit is. It’s a social interaction during which any topic can be discussed, participants don’t need to know anything about the topic, they are free to make unsupported statements, they are free to use uncensured profanity, insult anyone the wish or change the subject altogether. Shoot the shits are designed to eliminate the need for a therapist’s session; their efficacy is far better and you won’t have to pay $150, or more, per hour to a jackass who majored in psychology so they could understand themselves.

Regular readers know that I differentiate between a psychologist and a psychiatrist. A psychiatrist is a Medical Doctor, which means they had to complete a Pre-Med program as an undergraduate student, score high on the MCAT( Medical College Admissions Test) and slug it out through four years of medical school. However, in no way should that suggest to you that they know what they’re doing. Unlike a psychologist who engages you in conversation, a psychiatrist will prescribe 3 or 4 pills, which when taken as prescribed will turn you into a lunatic or a vegetable. I’ll make my point below.

The individuals below were all arrested for rioting in Manhattan. They were participants in New Afrikan Black Panther Party rally. Now, before I go any further allow me to say that I have no idea what has happened to the Black Panthers, but I’ll guarantee you the brothers back in Oakland would have never let a handful of honkeys join the group – unless they were tagging some of them. But, I digress. 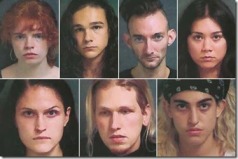 The female on the left is a wealthy Upper East Side resident, her name is Clara Kraebber.What is interesting about Clara is that she is the daughter of an architect and a child psychiatrist with a second home in Connecticut.

These miscreants are all upscale individuals who hijacked a black movement to riot and destroy property of individuals who had nothing to do with anything. I’ll guarantee you the brothers in lockup already nicknamed the guy with the ears “wingnut.”

It’s also important to note that California and New York have the largest number of psychologists in the country. You’re seeing the results. So, if COVID19, masks and social distancing have you down, for God’s sake schedule regular shoot the shits, they work.

One of the effects of this pandemic and lockdown is that people are suffering, unable to pay rent, mortgages, auto insurance and even food. A couple of days ago, on my way to Starbucks, I caught a display of that frustration. This guy was standing outside the local GEICO Insurance Office. 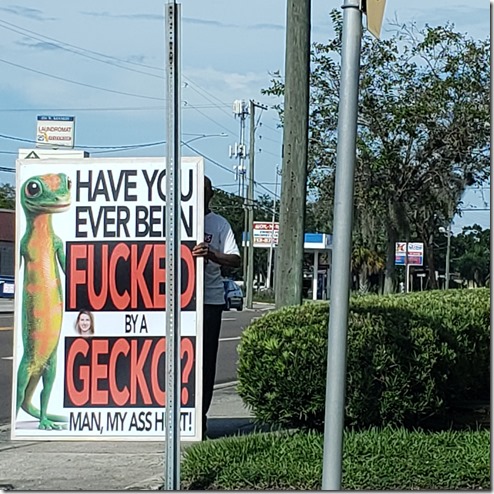 Another source of frustration is how pandemic information is being distorted by the media. There’s a great deal of confusion over the COVID vaccine driven by ludicrous media coverage. The vaccine is being presented as something that prevents you from being infected, that’s incorrect. A vaccine programs your immune system to recognize the presence of a pathogen and reacts to destroy the invasive little rascal. It does not prevent you from being infected, you can be infected but your immune system will be all over the virus, so get your vaccine as soon as it’s available. The President’s Administration is running parallel paths of production and distribution so as soon as the vaccine gets a green light you’ll see a very aggressive rollout.

Okay readers, have a great weekend, be safe and have a shoot the shit with your friends and family. Last but not least keep those sweat pumps in low speed.