Posted on Friday, 8 January, 2021 by twobirdsflyingpub

(Potomac, MT) – Elite Iron, premier designer and manufacturer of professional grade firearms equipment and accessories, is proud to offer their innovative Revolution Bipod Panning Model.
Through years of researching and developing alternatives to the traditional bipod, Elite Iron has patented their proprietary designs based upon deep experience of real world tactical demands. The result of their commitment and efforts is the creation of the Revolution Bipod Panning Model. Designed for rifles up to .338 caliber, it is the most revolutionary choice in superior design for strength, stability, adjustability, and choices in the tactical world today. The bipod and mount weigh only 24 ounces.
Elite Iron has chosen only the highest quality components, resulting in reliable product strength. With no exposed springs or cheaply made stamped parts, the Revolution Bipod Panning Model‘s legs and tube stems are made of 7075 aluminum. The leg locks are made from 17-4 heat treated material  and the hidden springs are made from 316 stainless steel.
The Revolution Bipod Panning Model also offers impressive stability while allowing the rifle to revolve a full 360 degrees. The bipod maintains control of two axes of motion: side to side and up and down. Any position can be locked in place by tightening the tri-nut. Ease of movement decreases by tightening the torsion nut slightly until the final position is found and locked. The innovative design of the Revolution Bipod places the rifle under the apex of the legs and not on top.
The superior adjustability of the Revolution Bipod Panning Model allows the rifle to have horizontal 10 o’clock through 2 o’clock movement. The length of the legs can be adjusted quickly one at a time and at different lengths. Legs can be positioned or rotated forward, straight or back and either in parallel or separately. The center line of the ring is 7.25″ with legs retracted and 12.25″ extended on the Standard Leg Bipod. On the Optional Short Leg Bipod, the center line of the ring is 6″ with legs retracted and 10″ extended. The user can also attach different kinds of feet to match the environment.
Every Revolution Bipod comes with a choice of one free mount. The buyer will need to choose the right mount for the rifle and the interface (at an additional charge) that matches that mount. However, if the rifle has an interface such as a PIC RAIL, an interface might not be needed.
Every Revolution Bipod comes with a 2-year limited warranty. All parts are replaceable and available from Elite Iron.
For more information about Elite Iron, visit www.eliteiron.com. 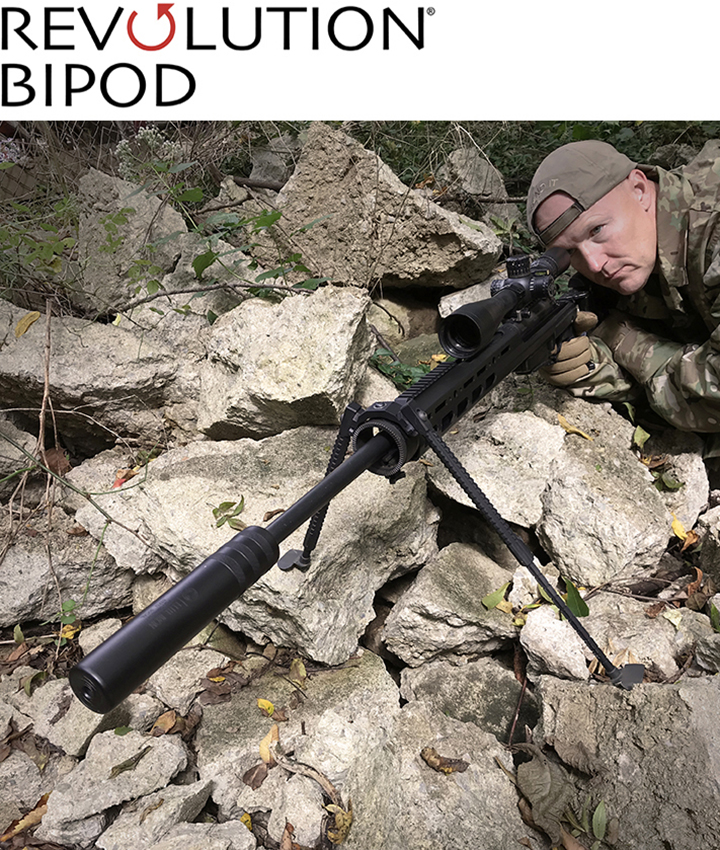