Posted on Thursday, 11 February, 2021 by twobirdsflyingpub

Chicago, IL (February 10, 2020) – Like most dedicated treasure hunters, Troy McCormick does a lot of research trying to find prospective sites to use his metal detector. Besides surfing the internet, perusing old newspapers, and talking with local historians, the host of Bootprints.TV drives back roads looking for possible foundations, ruins, or other indications of abandoned houses. Sometimes, he simply stumbles upon such locations while hunting.

Last fall, McCormick was slowly cruising the county roads of southern Indiana, scouting for deer. Since the leaves were mostly off the trees, he was able to spot an old ruin. On closer observation, the remains of a two-story brick home with matching chimneys on either end came into view. Despite being about a quarter mile off the road and covered in brush and vines, the structure was impressive.

McCormick resolved to find who owned the property so he could get permission to search it. After locating the owner from a current plat map, he received permission to detect the area, including the 50-plus acres surrounding it. He was told the house was built in 1812 with handmade bricks made right on the property. The house had been occupied from the time it was built until the 1960’s. This meant there should be lots of lost items to find. 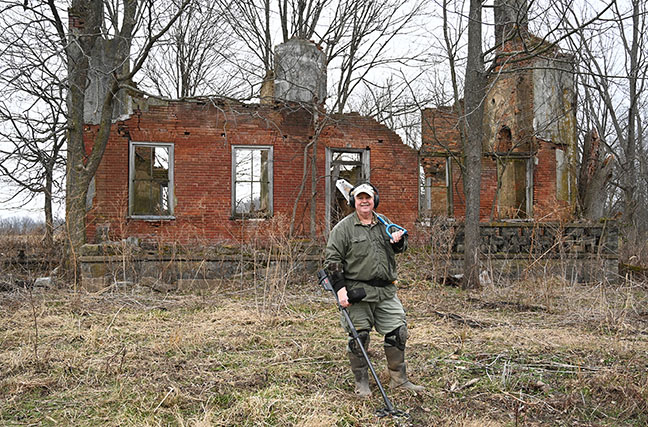 A few days later, an excited McCormick loaded up his Minelab CTX 3030, his Minelab PRO-FIND 35 pinpointer, and his digging tools and headed for what he hoped would be a great hunt. He started detecting around the old house site. When asked what centuries old items he found there, he replied, “I was really disappointed at first. I was finding very few targets in the old yard. It was almost like another detectorist beat me to it.”

Soon, McCormick moved away from the main house to a collapsed outbuilding. While searching in the rubble, McCormick found a bunch of porcelain dishes and stoneware jars dating back to the mid 1800’s. He then moved to the remains of an old spring house and began swinging his CTX 3030 around it. Moving further into the surrounding woods, he discovered an old cellar hole from a lost log cabin which pre-dated the brick house. He began hearing multiple targets there. He spent the next two days digging pewter spoons and forks, dozens of flat buttons, a wick turner from an oil lamp, an axe head, and other assorted artifacts. 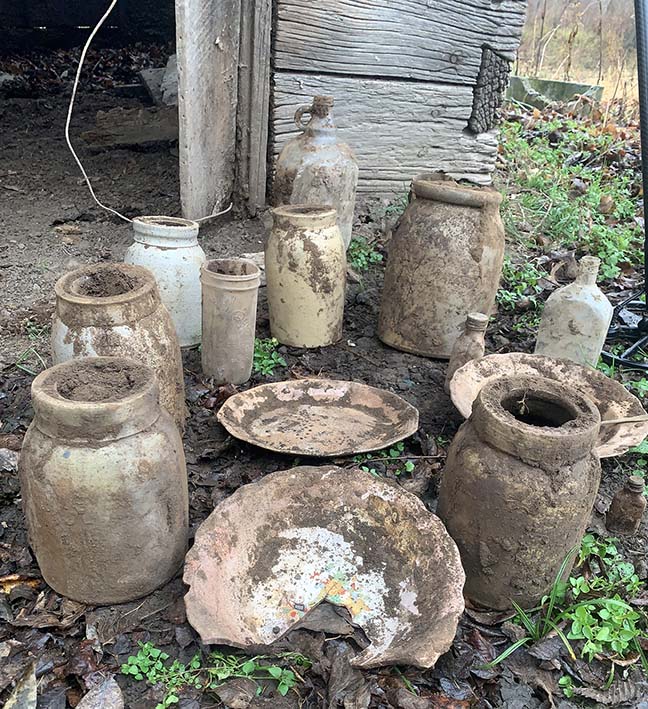 An assortment of stoneware unearthed by McCormick at the Southern Indiana homestead.

When reminiscing about how he got started metal detecting, McCormick says he acquired his first machine when he was 13. It was a brand popular back in the early 70’s, and one he was able to afford at the time. He said he used it a lot in high school and college, then put it away. When asked why he quit detecting, he related, “I just got busy with family and career, and my hobby just got put on hold.”

He put his machine in the closet and it stayed there for several decades. A couple years ago, McCormick began noticing many of his friends and hunting buddies had detectors and he decided to return to the fun of the hunt. When asked why he chose a Minelab detector to resume the hobby, he responded, “I told myself when I got back into it, I wanted the best detector out there, and in my mind, that was the Minelab CTX 3030. If you’re going to do something, then, do it right!” As a lifelong outdoorsman, McCormick had learned the value of using the best equipment, so he wanted a quality detector with great discrimination, something that was waterproof, and a machine that could hit the deeper targets when needed. That was the Minelab.

While finding a lot of assorted “treasure” around the old site, McCormick felt there should be more there, so he kept searching. He slowly covered the ground with his CTX 3030 and finally heard a coin signal. Careful digging brought his first coin to the surface. It was an 1856 seated liberty half dime. More swinging soon brought another silver coin signal. After removing some of the dirt, his PRO-FIND 35 pinpointer gave a loud continuous signal indicating a non-ferrous target. He rubbed most of the dirt off, but didn’t recognize the face on the object. Turning it over, he discovered a royal crown and shield. He yelled, “A Spanish real!” Actually, he was only half right. It was an 1805 Spanish 1/2 real. 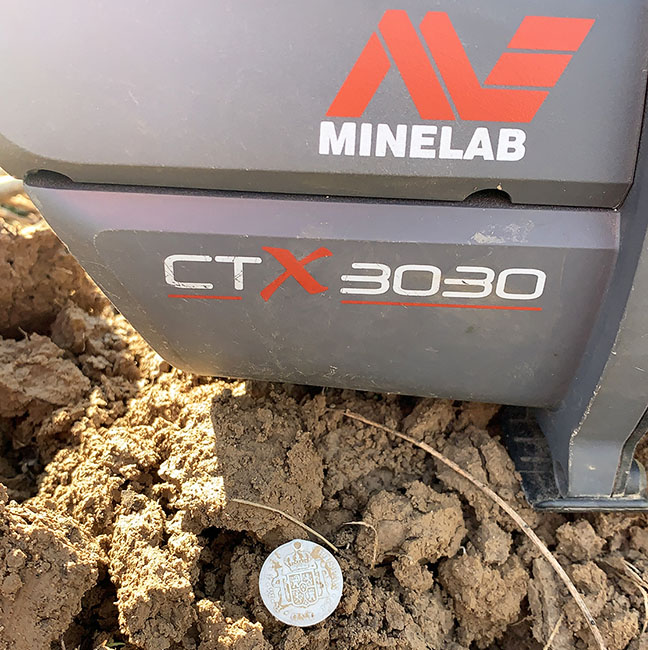 McCormick continued searching the old site for several days. His finds kept accumulating. Dozens of flat buttons dating through the 1700’s and 1800’s made of various materials were discovered by his Minelab detector. He also uncovered an 1834 congressional campaign button. The winter weather didn’t slow him down. One morning it was 17 degrees outside and the ground was frozen down about two inches. McCormick switched to a smaller coil on his CTX 3030 to better locate the good finds in areas filled with iron and trash. It worked. Out of the ground came a 1740 pewter rat-tail spoon, a 19th century metal spoon, two Civil War era buttons, more silver buttons, and three nice buckles.

McCormick wasn’t done with this property. Like most detectorists, he knew there was probably more lost items to be found. He returned again to what he now calls his “Spanish Silver” site. Snow was on the ground, but the Minelab machine didn’t care. It gave off a good signal and out came another unknown coin. After researching the find, he had discovered a copper, 2 Kopeks coin from a couple centuries ago. While the date was worn off, this design was made at the Saint Petersburg Mint of Goznak, Russia, sometime between 1801 and 1825. 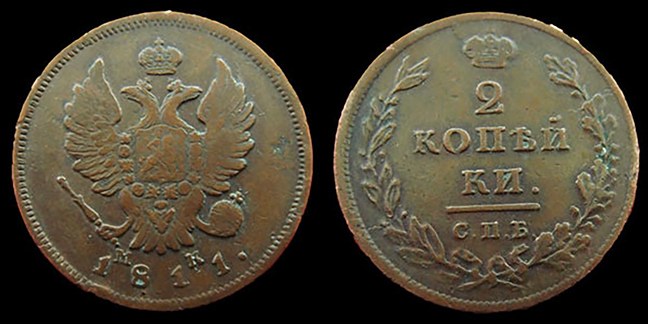 A representative image of the Russian coin discovered by McCormick, who speculates the find to be related to the 17th century fur trade.

In addition to his CTX 3000, McCormick says he owns and uses a couple other Minelab detectors. “The 3030 is always my go-to machine, but I also have a Minelab EQUINOX 800 and a GPZ 7000. With Multi-IQ simultaneous frequency technology, the EQUINOX is incredibly popular because it’s easy to use right out of the box and flat out finds everything,” he says. “It’s a great machine for detectorists who want to step up their game. The GPZ 7000 is my dedicated gold detector. I plan to be out west and searching for gold nuggets with the GPZ 7000 very soon.” 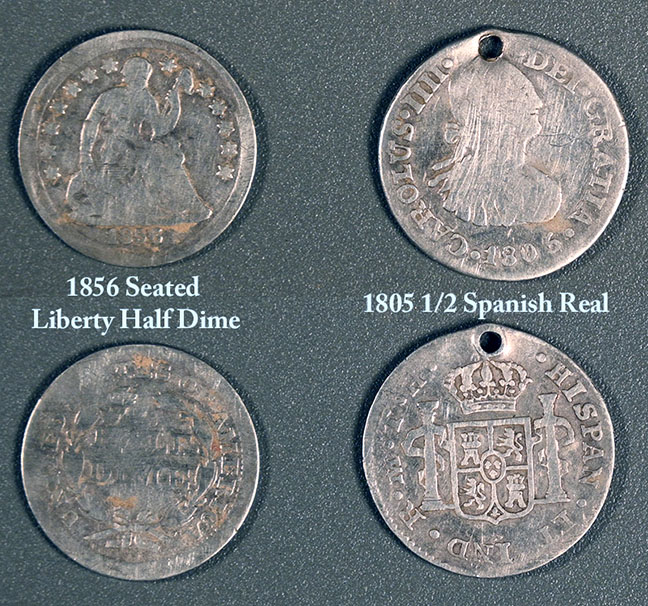 The two silver coins unearthed at the site by McCormick. How many more remain undiscovered?

Spanish silver. A Russian coin. Civil War era artifacts. All found around a single abandoned homestead in Southern Indiana. What else might be discovered at this site before the search is over? Learn the answer by viewing McCormick’s ongoing adventures on his internet TV show, Bootprints.TV, or by following him on social media at @Bootprints.TV.