Nobody Loves Me, But My Mother, And She Could Me Jivin` Too

Posted on Friday, 23 July, 2021 by twobirdsflyingpub

Thank God it’s Friday! We’ve made it through another hellacious week. In all candor, the COVID-19 Delta strain, get a vaccine, don’t get a vaccine, you need a mask you don’t need a mask extravaganza has me completely bored. You may be thinking of going to visit a therapist but folks they’re as screwed up as you are. I got word yesterday afternoon that my nephew’s son has tested positive for the COVID Delta variant, he is 12 years old and is now isolated from his younger brother, so you can take the transmissibility reputation of the Delta variant to the bank. The solution is to get yourself and immediate members of your family vaccinated. If you or your family members have preexisting conditions you’ll want to discuss it with your family physician.

The medical component of the COVID national response was first rate but the communication and public relations is an absolute disaster. The first to blame for the communications failure is the media who handled this pandemic like imbeciles, they were concerned more with showing how much they knew than communicating an accurate message. The CDC was equally incompetent and I say that with respect for the work they do. They should have hired a public relations firm to manage the messaging and distribute information in a clear, palatable and non-threating manner. What we have done is demonstrate how utterly incompetent the country is in dealing with what I will describe as a CBRN incident. All I can say is we better get our shit together because this will happen again and from my point of view it won’t be a random natural event.

So, if all of this stuff stresses you out, for God’s sake don’t go to a therapist; instead schedule a shoot the shit. A therapist is a jackass who majored in psychology so they could understand themselves. A shoot the shit , especially with free food, on the other hand, will set you back the price of a couple of pizzas. Participants don’t need to know anything about the topic being discussed, they are free to make any unsupported statement they wish, use uncensored profanity, insult anyone they wish or change the subject altogether. So, let’s shoot the shit…

Who besides me is excited about the prospect of commercial space travel? This month we saw two of the world’s richest men fly to space aboard crafts and technology they funded. We literally have morons in Congress that feel they should be paying taxes and not investing in space related ventures. You’ve got to be extraordinarily stupid. Someone should suggest to them that the reason they’re paying so little taxes is that they’re using laws they created. I love wealthy people, but what we should be doing is providing every fiscal incentive available for new business creation.

What Sir Richard Charles Nicholas Branson and Jeff Bezos accomplished on July 11 and July 20 respectively is a major accomplishment. Their projects will expedite colonization of the moon and possibly Mars, and the activities needed to support their efforts will create hundreds of thousands of jobs impacting a broad base of the U.S. Economy. The first thing that comes to mind is the impact of reusable launch vehicles on things like telecommunications, navigation and a variety of industries or organizations that rely on space based assets. So let’s encourage more of this activity and not discourage it. 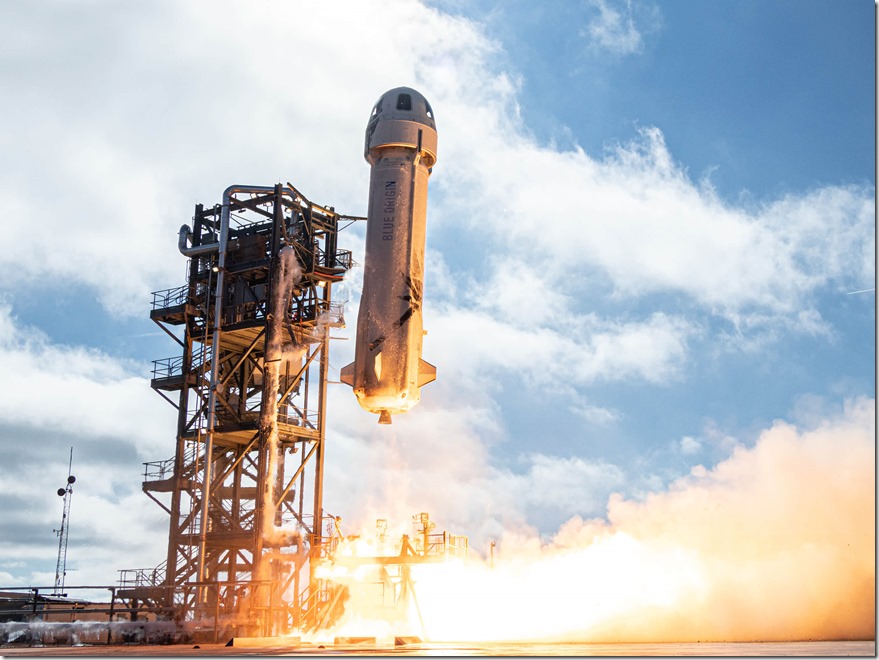 Have a great weekend. Shift sweat pumps into low speed , and schedule a shoot the shit with your buds or family!