Posted on Tuesday, 17 August, 2021 by twobirdsflyingpub 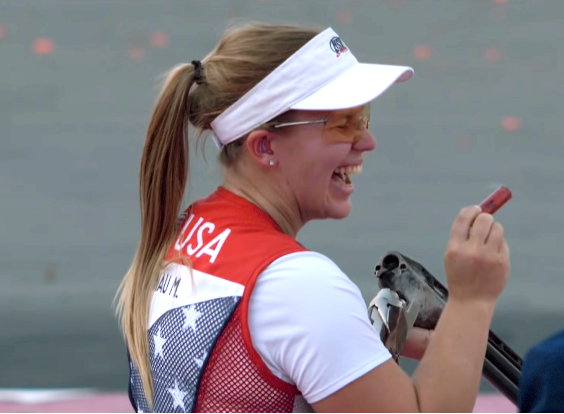 EAST ALTON, Ill. (August 16, 2021) — Madelynn “Maddy” Bernau was one of more than 11,000 athletes to compete in the 2020 Olympics and she made her time in Tokyo count. She and her teammate, Brian Burrows, brought a bronze medal home for Team USA in the first Olympic mixed team trap event.
Bernau also competed in the individual Ladies Trap event where she narrowly missed qualifying for the finals and placed seventh overall.
“We are extremely impressed with Maddy’s performance in Tokyo as well as the other Team USA shooting sports competitors. Maddy is a terrific ambassador for Winchester and the shooting sports. She competed against the world’s best and is coming home with a medal — it’s impressive to say the least,” said Matt Campbell, vice president of marketing and sales for Winchester Ammunition.
Winchester has a proud Olympic history of its own. In addition to Bernau’s bronze in 2021, Winchester AA shotgun shells have been used by many of the best competitors in the world for decades and played a part in more than a dozen Olympic medal-winning performances. The legendary Winchester AA has earned a trusted reputation worldwide due to its premium high-antimony shot, high-strength hull, brass head and AA recoil-reducing wad. With more than 40 different SKUs to choose from, there is an AA shotshell for all consumer needs.

Born in Waterford, Wisconsin, Maddy took up shooting American trap at the age of 12. She went on to join her high school shooting team where she shot trap, skeet and sporting clays through the Scholastic Clay Target Program (SCTP). In 2014, Maddy attended an SCTP development camp at the Olympic Training Center and was introduced to International Bunker Trap. With a goal of one day competing in the Olympics, she worked hard to master the International Bunker Trap discipline. By 2018, Maddy was representing the U.S. at the Junior Grand Prix in Italy and World Championships in Korea. This year, Maddy has won silver and bronze in individual and team respectively at the International Shooting Sports Federation’s World Cup in Lonato del Garda, Italy.

Winchester is the largest small caliber ammunition enterprise in the world and the leader in delivering innovative ammunition products to hunters, sport shooters, law enforcement and the U.S. Warfighter. As the official ammunition of the Scholastic Clay Target Program (SCTP), Amateur Trap Shooting Association (ATA) and AIM youth program, Winchester is unmatched in its support of the shooting sports. The 155-year-old Winchester brand is built on integrity, hard work and a deep focus on its loyal customers. Learn more about Winchester by visiting Winchester.com