Posted on Friday, 27 August, 2021 by twobirdsflyingpub 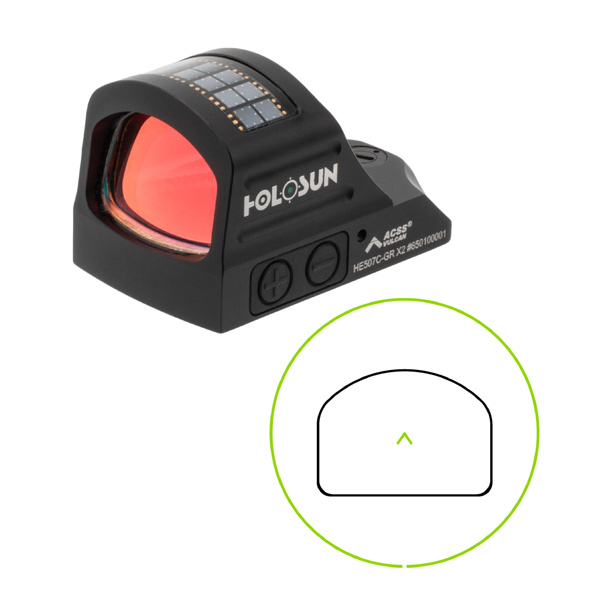 HOUSTON, TEXAS – At the 2021 Industry Choice Awards, Primary Arms Optics and Holosun Optics have released a new version of the co-branded HS507C-X2 ACSS, now featuring a green-illuminated ACSS Vulcan reticle.
Released earlier this year, the HS507C-X2 ACSS made waves in the miniature reflex market by introducing a revolutionary new reticle design that makes it easier to get on target. While most reticles are limited to a simple aiming dot, ACSS Vulcan changes the game by combining an infinitely precise center chevron with a large outer circle. When aimed correctly, this circle falls outside the optic window, leaving only the center chevron for fine precision. If the user’s aim is off target, the edge of the circle comes into view, guiding them back to center. It’s a novel approach to sight acquisition, eliminating many of the challenges associated with mini reflex optics.
Since its release, fans of the optic have been asking for a green-illuminated variant. Now, Primary Arms Optics is proud to announce that the units are now ready and available for purchase.

“The response to the original Primary Arms ACSS Vulcan reticle in Red illumination, has been nothing short of phenomenal,” says Terry Mears, Primary Arms Optics’ Director of Product Marketing. “Those who prefer a green reticle, especially anyone with color-recognition issues toward the red end of the color spectrum, will appreciate this option. The law enforcement community which we continuously interact with, specifically asked for this reticle option and we delivered.”

For more information on how to order the Holosun HS507C-X2 ACSS with Green-illuminated ACSS Vulcan, click here.

Primary Arms Optics
Founded in 2008, Primary Arms Optics® is a leading innovator in tactical optics, offering a comprehensive selection of rifle scopes, prism scopes, red dot sights, optic mounts, and accessories. Their Advanced Combined Sighting System (ACSS®) is a high-performance reticle solution to the challenges of modern marksmanship, distilling complex mathematics into intuitive holdovers that enhance your speed and precision. Each ACSS reticle is specially designed to outperform in real-world applications, incorporating a mix of tools to deliver instant firing solutions. These tools may include ballistic drop compensation, auto-ranging stadia, wind holds, moving target leads, or an infinitely-precise center chevron. Primary Arms Optics produces several tiers of products to meet the needs of any budget. The premier PLx® optics line prioritizes clarity and craftsmanship with first-class materials. The mid-tier GLx optics incorporate premium technologies with approachable pricing, while the popular SLx® optics offer both proven reliability and value. Every Primary Arms Optics product is hand-inspected at their Houston-based headquarters, and all their products come with a Primary Arms lifetime warranty.